‘Moving toward simplification of the PC subsystem’

It is built with 3.5-inch disk drive, an up to 128GB SSD, and the SATA Express PCIe interface with the flash and disk components presented as a single volume.

Currently it is shipping 500GB-1TB Laptop and UltraMobile SSHDs plus its 1 - 4TB Desktop SSHD with up to 8GB of flash and a SATA 3.0 interface.

WD has been focussing on building in greater amounts of flash than Seagate.

WD said that in its "labs, WD’s SATA Express 4TB drive with 64GB cache achieved a PCMark8 benchmark score of 4459, demonstrating near-SSD performance at an optimised GB-per-dollar value". Its announcement release includes a chart showing this: 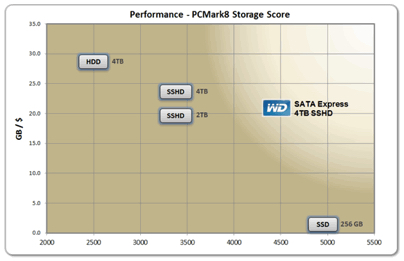 The chart shows the 4TB hybrid being much faster than a 4TB HDD, as well as being cheaper, and almost as fast as a 256GB SSD. It is faster than two other hybrid flash/disk drives, labelled SSHDs on the chart. Which supplier made these 2TB and 4TB products?

We suspect they were Seagate Desktop SSHD products and WD is beating them on performance by having much more than 8GB of flash available as well as using the SATA Express interface.

“We see the industry moving toward simplification of the overall PC subsystem to a single storage bus based around the PCIe protocol," said Gary Meister, WD's SVP of engineering. "In this demo, we placed a hard drive, flash NAND and SATAe technology into one package, freeing up one slot in the system." ®