Quiz hints at hybrid cloud omni-manager to rule them all

Microsoft has floated the idea of a cloud-based control freak as an heir to or adjunct for System Center.

Redmond regularly pops out polls on Technet readers and yesterday promoted this one as offering the chance to articulate “... the challenges you face with your Management tools and where you would like to see us invest going forward.”

Once the quiz gets on to the topic of cloud, Microsoft isn't shy about suggesting Azure might be a handy tool with which to manage on-and-off-premises kit. There's an option to tell Microsoft “My organization would be willing to use Microsoft Azure services to manage(Provision, Monitor, Patch, etc...) my datacenter” and a question asking “If I had a cloud based management solution that met my requirements, my organization would be willing to adopt it in the next 12 months.”

There's also a request to “Prioritize the capabilities you require from a cloud based management solution” and a straight out Yes/No question asking “Would you replace System Center in your datacenter with an equivalent cloud service?”

Would Microsoft be asking these questions if it wasn't seriously considering a cloudy management tool?

The company also has some form in the field: last December it switched on the Azure management portal preview depicted below, complete with Tile-style interface. 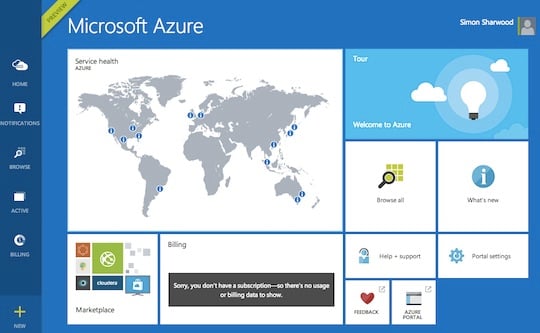 Might that new portal be informing the System Centre team's efforts? The next version of Windows Server and associated tools aren't expected until late this year, or early next, so there's a while to wait before we'll know. For now, you at least have the chance to influence Redmond's thinking on the topic. ®