Last year was utter rubbish. Thanks for being part of it!

A great time for natty cyberpunk Kim Jong Un, though

Something for the Weekend, Sir? I’m glad 2014 is over. It was rubbish. However, given the circumstances, can we have it back please? This year is worse.

Not only was last year crap for many, Facebook’s algorithm oompaloopas made sure they rubbed it in by showing us graphically how crap it was via its now-notorious Year in Review fail.

To be fair, all it did was pick at random one of the photos we uploaded over the previous 12 months and plonk it in the middle of an ugly digital greeting card so cheap and amateurish that it made Moonpig’s product line look like the catalogue of the Hermitage Museum at St Petersburg.

By contrast, my mates looked as if they had a whale of a time, what with children’s birthday parties, family weddings, and glorious holidays in the sun:

OMG, I thought, my friends are so lively, so successful, so middle aged and so fucking middle class I could just burst with pride. When I saw what Facebook had put together for them, I couldn’t wait to see what the Zuckerloompas had in store for me. 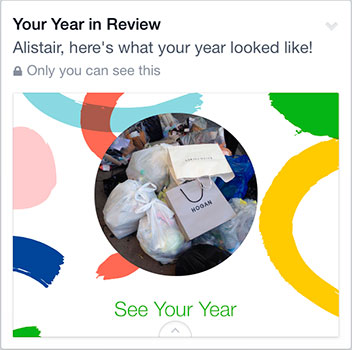 Mmmmm, that's quite literally, a pile of rubbish. I’m not complaining, mind. As a summary of my year, it was pretty damn accurate.

I particularly enjoyed trying to empathise with the toe-curling embarrassment of those who participated in the email exchanges regarding the walking, talking (but not, apparently, acting) freak show that is Angelina Jolie.

When movie producer Scott Rudin turned down the suggestion of meeting with Jolie in person by typing “Nooooooo noooooo noooooo”, it made me wonder if he’d once been a sub editor at The Register.

Not so much fun, one supposes in the aftermath of Sony hack season, was the inability of lots of juvenile recipients of PlayStation 4s at Christmas to get their consoles working before the decorations came down. It couldn’t have been all bad, though. Less active console time means fewer piss-filled plastic bottles lined up along the bedroom wall and seeping into the carpet. Look on the bright side, eh?

Sony’s official response was to direct everyone’s attention to a shit comedy film that would have been buried without trace under any other circumstance. The claim was that North Korea had been responsible for the hack whose main purpose was to mess up its opening week.

Now, you can accuse North Korea of being responsible for a lot of nasty things. I don’t know for certain what those things are but I am reliably informed that when a shrivelled North Korean man in military uniform and a hat that’s way too big for his little prune head invites you to see some puppies, the implication is much worse than you can imagine - especially if you happen to be one of the supreme leader’s less favourite uncles.

However, the North Korea Sony hack claim triggered all the bullshit meters I had installed over the summer. I just can’t see the might of North Korea’s world-renowned IT heavyweights doing any damage to any computer anywhere, except by accident. My suspicions were confirmed when the FBI fingered the rogue state as the culprit. This alone pretty much guarantees that they had no involvement in it whatsoever.

The argument goes that evil dictators get riled by films that poke fun at them and will try to do anything to discredit them or prevent them from being shown. Of course, they could avoid ridicule more readily by not having comedy bogbrush moustaches or not doing Billy Bunter impersonations, but there you go.

Surely Kim Jong Un is not the type of psychopath to take such a slur lying down - at least not without four people helping him up again.

He is North Korea’s main man, its numero uno, figuratively (and quite literally) the big cheese. He can fly a plane, he can stand in the middle of a field looking through binoculars, he can watch tanks driving by for hours on end and he can point at things dismissively without knowing what they are. Surely such an extraordinary multi-skilled man can command his tech minions to hack into Sony Pictures on a whim?

Well, perhaps not. Kim Jong Un is not all-powerful, after all. Even he knows that there are things that he can’t do, such put a man on Mars, invent a flying car, order a haircut or see his own feet, but he takes it all in his waddle.

Voyager 1 fires thrusters last used in 1980 – and they worked!