The eXpat Files This week's expat is Lawrence Hunt, just returned from four years in South Africa, where he's had quite an adventure.

Lawrence was in Nelson Mandela's home town on the day of his death and was told to leave in case ethnic cleansing got going, climbed transmission towers without a safety net, and slept in a bunk bed for months at a time.

Over to you, Lawrence!

The Register: What kind of work do you do and with which technologies?

Lawrence Hunt: At the moment I'm working as a second-line network technician, so mostly Cisco/Juniper gear and Linux. In South Africa, it was whatever the customer had managed to buy, usually second-hand and of questionable provenance. I saw a large number of "Cisce" switches, for example.

The Register: Why did you decide to move to South Africa? And where did you live and work there?

Lawrence Hunt: My mother's family lives down there (she's South African) and after getting my degree I wanted something different. I'd always heard about - but never been to - the country.

I'd acquired my South African passport the year before, so I thought, why not? I started out living in Cape Town, but after about six months I moved down the coast to Queenstown.

The Register: South Africa has a reputation as being pretty dangerous. Did that give you pause? Did it make for any interesting domestic arrangements or moments at work?

Lawrence Hunt: My family reassured me before I flew in that everything would be fine, and Cape Town's like any big city - be careful after dark, don't wander in the rough neighbourhoods, that sort of thing.

In townships, however, things are different. You don't go out after dark, you keep your van as empty as possible, you don't stop for certain red lights or stop signs because you will get jacked if you do. Carjacking's a huge thing - why do you think South Africa's the only country where you can legally buy, fit, and use anti-carjacker flame-throwers? 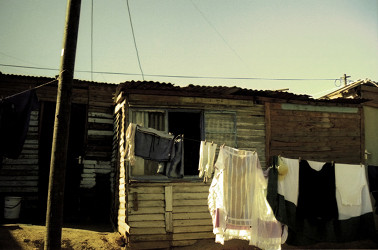 Townships can be dangerous, with carjacking an issue

As for domestic arrangements, bars. Bars on everything. Bars on the windows, metal gate over the door, some people even clamp their own cars overnight. Paranoia about crime far outweighs actual crime, though.

As for work moments, probably the best one was when I was on the ground at a cell tower node with two guys up the mast replacing a radio. A bakkie (pick-up truck) rolled up with six guys in the back with AKs. Apparently, they'd heard that a different gang of tsotsi (gangsters) were on their way to steal the copper.

For SAR1000 (about £100) they would "protect" us from the copper thieves. I paid (obviously, they had GUNS) and sure enough, ten minutes later another bakkie full of guys turns up, sees the first bakkie, and quietly drives away. Our guys nod at me, and roll off.

I assume they met up later and split the bounty - either that, or they're entrepreneurs providing a service the SAPS (South African Police Service, and yes everyone calls them "the saps", even themselves) can't or won't. I've called 10111 (the South African 999) and gotten an answer phone.

Copper theft is a MAJOR issue - power cuts are common in some townships because of it, and Eskom (the power company) just rolls out and replaces it, and then the tsotsi steal it again.

Funny story: in a small town near East London, there's a gang of tsotsi that steal manhole covers. They sell them to the scrapyard, and the scrapyard sells them back to the city, because it's cheaper to buy them from the scrapyard than to buy new covers. So the city puts them back in the ground, and the tsotsi steal them, and round and round we go!