Caveat: the 2 Kelvin pants you need to carry it would put you in a state ...

The lifetime of quantum memories – a crucial component of practical quantum computing and communications – is typically less than a second. Now, work led by the Australian National University has turned up quantum states that last as long as six hours.

That “coherence time” – how long an entangled state can be preserved – is more than 100 times better than previous work, the ANU says.

In their publication in Nature (abstract here), the group led by the ANU's Manjin Zhong (in collaboration with New Zealand's University of Otago) trapped quantum states in europium atoms embedded in a crystal.

As the abstract notes, the approach overcomes one of the big problems with trying to distribute states over optical fibre: the scattering, diffraction and absorption in light limits the single-hop transmission of entanglement quanta (in this case photons) to around 100 km.

“The coherence time observed here is long enough that nuclear spins travelling at 9 kilometres per hour in a crystal would have a lower decoherence with distance than light in an optical fibre,” the abstract states. 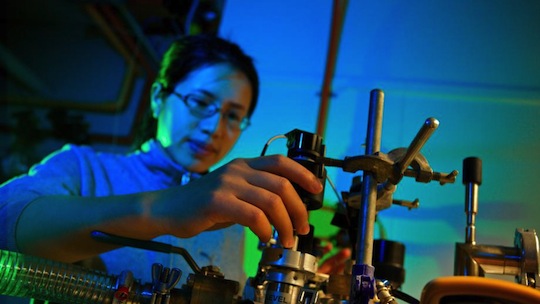 The ANU's Manjin Zhong in the university's spectroscopy lab

Rather than photonic states like polarisation, the group wrote the quantum state onto the spin of the europium. To preserve the state, they subjected the crystal to a combination of fixed and oscillating magnetic fields.

The University of Otago's Dr Jevon Longdell explained that the magnetic fields isolate the europium spins and “prevent the quantum information leaking away”.

You can't send the spin states across a communications channel like a fibre, but the researchers say having such a long-lived state enables a kind of “sneakernet” to distribute quantum states: “Even transporting our crystals at pedestrian speeds we have less loss than laser systems for a given distance,” Zhong said.

Think of it as a USB key for entanglement – albeit one that needs a 2 Kelvin environment to function.

Not only does the “quantum hard drive” provide a new technique for quantum communications, the researchers also note that it gives them a chance to observe and experiment with entanglement at distances greater than has been practical in the past.

And if the researchers can enhance the lifetime of their coherence far enough, perhaps they could team up with the group that last October proposed sticking quanta in container ships as a communications medium. ®