May the (hydraulic) force be with you next time this month

Pic SpaceX boss Elon Musk says his boffins have worked out what caused his company's Falcon 9 rocket to miss its floating landing pad – and that a solution has already been decided.

The top half of the multistage rocket successfully delivered its cargo pod of supplies to the International Space Station on Monday after the bottom reusable half separated and fell back to Earth.

While the upper stage disintegrated in our atmosphere after completing its job, the lower stage was supposed to gradually descend vertically under its own power using directional thrust from its nine engines onto a landing pad floating at sea. However, this didn't happen quite according to plan.

Rocket made it to drone spaceport ship, but landed hard. Close, but no cigar this time. Bodes well for the future tho.

Four independently controlled paddles on the side of the rocket stage counter the falling object’s propensity to spin. These "X-wing" paddles ran out of hydraulic fluid before the rocket could be brought to the pad, Musk said over the weekend. That caused the Falcon stage to hit the deck – hard.

To fix this problem, the next Falcon to take off will carry 50 per cent more hydraulic fluid than before, Musk said. The paddles worked well at both hypersonic and subsonic speeds, the billionaire biz founder asserted.

SpaceX staff never put the odds of a successful first landing at anything more than 50/50 anyway, and the odds were stacked against the company due to the delayed launch of the ISS resupply mission. The rocket was coming down at around 5am local Eastern Standard Time, and in foggy conditions.

Sadly, we’ll never get to see how the landing went, since it was apparently too dark and foggy for SpaceX to get decent video. But pieces of the rocket were brought back to the Port of Jacksonville in Florida on Sunday inside the somewhat scorched and battered floating barge SpaceX is using for its water landings. 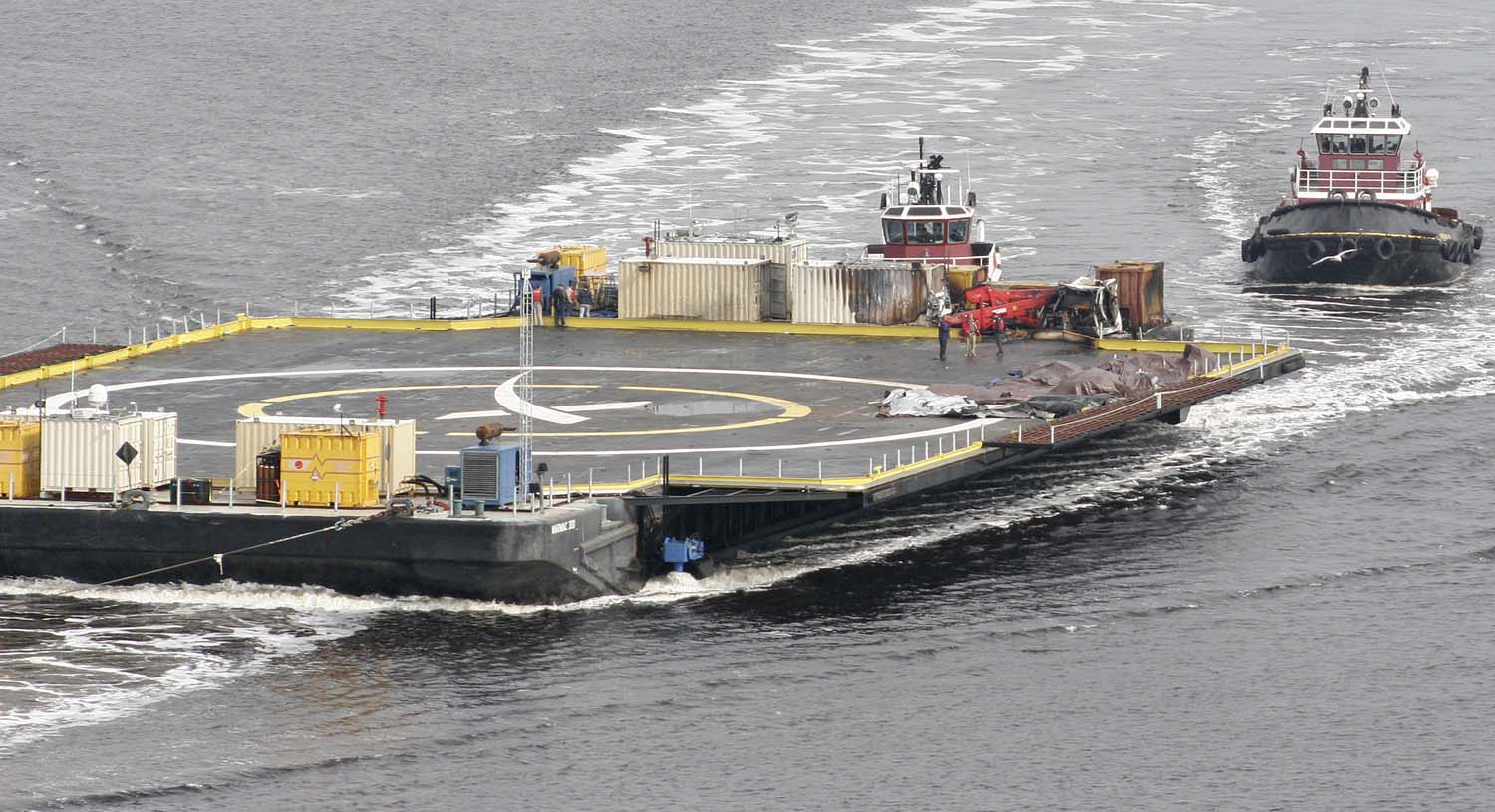 A bit of repair work needed, but it could have been worse (click to enlarge) Credit: SpaceFlightNow.com

The landing platform shows considerable damage to one corner, according to pictures from SpaceFlightNow.com, and several large chunks of metal from the hold were unloaded by heavy machinery and look somewhat like the outer skin of a space vehicle.

We won’t have long to wait for the next attempted rocket landing. Weather permitting, SpaceX will fire off another Falcon on January 29, carrying NASA’s much-delayed Deep Space Climate Observatory (DSCOVR) or – as it’s known at NASA – GoreSat.

In 1998 the then Vice President Al Gore proposed DSCOVR as an early warning system against coronal mass ejections from the Sun. The instrument will orbit at a Lagrange Point 1,500,000 kilometres (930,000 mi) from Earth and provide an hour’s warning of a flare heading our way – long enough to protect some vital electrical equipment and/or trigger panic buying of food and munitions, depending on how strong it is.

But when Gore lost his campaign for the presidency, the satellite was put into storage by the victors. It was dusted off in November 2008 and upgraded for launch this month.

Once the satellite is safely on its way, SpaceX’s Musketeers will be attempting to bring the Falcon 9 rocket back to Earth - this time intact. If that doesn’t work, then there are more launches scheduled for the firm in February and March. ®