REGARD our TINY but POWERFUL LASER, suitable for very SMALL sharks

Shrinking the scale of semiconductor materials to help build powerful quantum-computing systems has proved to be a real head-scratcher for scientists.

However, boffins at Princeton University have come up with a device that they think could be a "major step forward" for the tech.

The university's associate physics professor, Jason Petta, who led the study, said that researchers had created the smallest laser possible powered by single electrons that burrow through quantum dots.

The rice grain-sized device, dubbed a "maser", is a minuscule microwave laser that demonstrates how light and moving electrons interact with each other, said Princeton University.

To get an idea of the scale of the teeny-tiny maser, the researchers explained that it uses about one-billionth the electric current needed to power a hair-dryer.

"I consider this to be a really important result for our long-term goal, which is entanglement between quantum bits in semiconductor-based devices," enthused the Joint Quantum Institute, University of Maryland-National Institute of Standards and Technology's adjunct assistant prof Jacob Taylor, who co-authored the research paper.

Boffins undertook the study to create a better understanding of how to use double quantum dots (two quantum dots joined together) as the basic units of information, known as qubits, in quantum computers.

Getting the double quantum dots to "communicate with each other" was the end goal, explained physics grad Yinyu Liu, who worked with Petta in his lab. 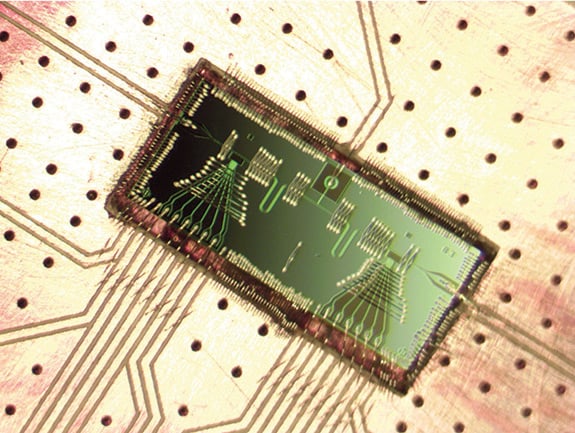 Prof Petta added that a double quantum dot was capable of only transferring one electron at a time. He said:

It is like a line of people crossing a wide stream by leaping onto a rock so small that it can only hold one person.

They are forced to cross the stream one at a time. These double quantum dots are zero-dimensional as far as the electrons are concerned – they are trapped in all three spatial dimensions.

The research could apparently aid the future development of light sources.