What do Pirates do? They STEAL things, in case you're forgetting

"It involves what Pirates have always done, and that's steal," is how Richard Mollett of the UK Publishers Association described Reda's contribution. "They want to take from member states their ability to determine those rules for themselves. And steal from creators the ability to exploit those works as they see fit."

Mollett highlighted one example of a Reda "tweak" where the consequences would be far-reaching.

The IP Kat blog has a summary here, and reckons that revisiting contract law, which Barnier had recommended, is one of the Pirate's proposals that may have some merit. In German copyright law, the author cannot assign ownership – it's all contract. While, unsurprisingly, copyright trade groups don't like this, it seems to function very well.

Even so, meddling with copyright law is a blunt instrument to achieve change and puts the cart before the horse. That's because the exclusivity right is a commercial incentive; if you remove the incentive, and increase the risk of going to market with intangible rights, you will probably get less commerce. Large IP-based businesses who don't like the IP regime in a territory can afford to go offshore, or not do business in Europe at all. The losers are invariably European individuals, who suffer twice: they lose protection over their own words and images, becoming second class global citizens, and other pats of the world get innovative new services.

For their part, member states still guard their ability to set their own law fiercely when it comes to cultural policy. For example, French copyright law evolved from a different philosophical basis to the utilitarian English law. For the French, authorship is sacred: the moral rights of the author to decide how their creations are used (not in a derogatory way, for example) are a French invention, and so became part of European law. This was clumsily grafted into UK law and doesn't exist in the USA at all.

But, as Tierney points out, Reda's changes torpedo moral rights.

"Reda wants the caricature exception to apply regardless of the use. So you can use a parody of a Marmite advertisement to help advertise the BNP. It's unhelpful to people to undermine the intellectual integrity of their own work.

"What would happen is the WIPO says you stick to it, or leave WIPO. The USA or China would probably raise it, as Europe would be failing to protect the rights of its creators."

When Barnier looked at European copyright law his litmus test was whether it would stimulate licensing. Very little in Reda's report needs to be achieved by hacking away at the law, and everything can be achieved by licensing.

Meet "Civil Society" - the people you didn't vote for

The uniquely European problem, however, is that the EU has funded a large Greek chorus of activists - "civil society". Which it has great difficulty defining". But it's committed to consulting these groups before it does anything; incoming EC commissioners had to abase themselves before The Great Unelected. Many of these outfits are reliant on the EU itself for much of their funding. For example, EDRi, a digital outfit that lobbies against copyright: they're reliant on the EC for a substantial chunk of their income. According to its most recent “transparency report" only two per cent of this "grassroots" organisation's funding comes from actual individual members. 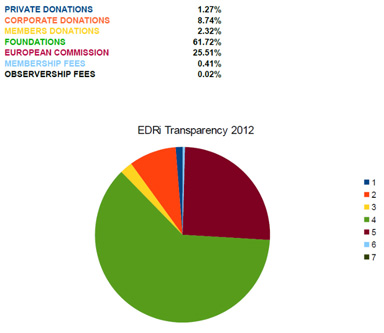 Only two per cent of the funding for "grassroots" activist group EDRI comes from members: Foundations - including George Soros’ OSI - and the EC itself are the major paymasters.

The European institutions already have a "democratic deficit", with voters flocking to Eurosceptic parties. When the EU threatens to remove copyright protections from ordinary people posting to Instagram or Flickr because it's in thrall to fringe lobbyists, it's only likely to weaken its mandate even further. ®

If decision is upheld, this 'could seriously harm FOSS and copyleft'
Software2 Apr 2022 | 29