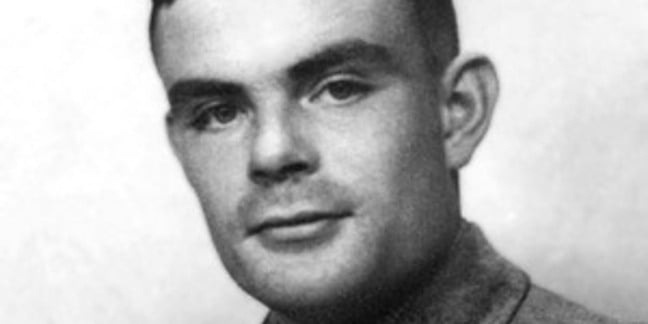 Auction house Bonhams says it has a lost Alan Turing notebook for sale.

The auctioneer says the notebook “dates from 1942 when he was working at Bletchley Park to break the German Enigma Code.” The 56 hand-written pages reportedly includes “... works on the foundations of mathematical notation and computer science”.

The notebook's provenance is clear: Turing willed it and many other papers to colleague, fellow mathematician and friend Robin Gandy.

Gandy donated plenty of Turing papers to King's College, Cambridge, but hung on to this one because some of the notebook's pages include his own – highly personal – dream journal.

An extract from an Alan Turing notebook to be auctioned in April 2015.
Click here to embiggen

The journal is in the middle of the book. Elsewhere, readers will find material like that above, which reads as follows:

The Leibniz notation dy/dx I find extremely difficult to understand in spite of it having been the one I understood the best once! It certainly implies that some relation between x and y has been laid down eg, y=x2+3x...

The notebook goes on sale on April 13th in New York and Bonhams expects a price of “at least seven figures”, probably helped along by interest in Turing biopic The Imitation Game. ®

Good folk of Forfar: Alan Hattel would like you all to know he's not dead despite what it says on his tombstone

So give him a call FFS