Online backup bods Backblaze have found Seagate hard disks fail much more than other suppliers, although recent improvements have redressed the situation.

In a blog the Backblaze blogger Brian Beach says: “As of December 31, 2014, we had 41,213 disk drives spinning in our data centre, storing all of the data for our unlimited backup service.

He provides data for “the annual failure rate through the year 2014” in cases where they have more than 45 drives of one sort from a supplier.

Although Seagate have the worst performance on the chart, that is for its 3TB disks. This year he says Backblaze likes all the 4TB drives they bought, including Seagate. “The Seagate Desktop HDD.15 has had the best price, and we have a LOT of them. Over 12 thousand of them. The failure rate is a nice low 2.6 per cent per year.” 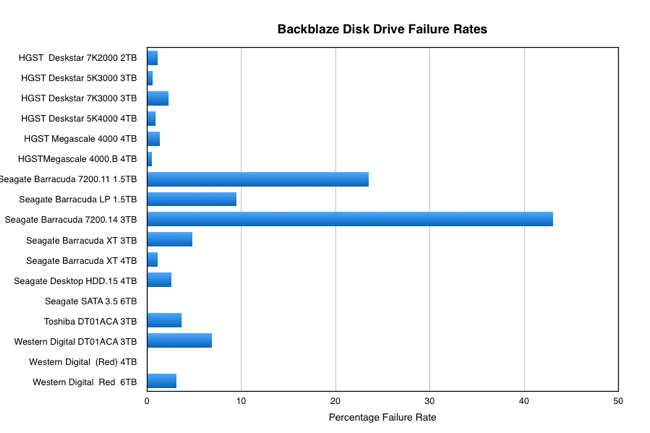 He only has one “pod” (meaning 45 drives) of Western Digital drives because their price is higher than other suppliers. “Generally the WD drives were $15-$20 more per drive,” he wrote, adding: “That’s too much of a premium to pay when the Seagate and HGST drives are performing so well.”

We always value our customers’ feedback and take it very seriously. It appears that Backblaze is reporting data from the same sample of drives from last year, which continues to be inconsistent with data received from other customers, and our large OEM installed base.

We absolutely stand behind the quality of our products with a best-in-class warranty, and we relentlessly test our drives for the workloads they were designed to support. We highly recommend that our enterprise and data center customers use the appropriate class of product to handle the workloads of enterprise environments.

Yet, as with previous data reported by Backblaze, desktop-class drives and some external drives were purchased and used in enterprise-class workloads – which they were NOT designed for nor tested to support. Therefore, we agree with Backblaze's comment that "It may be that those drives are less well-suited to the data center environment. Or it could be that getting them by drive farming and removing them from external USB enclosures caused problems."

Backblaze rates 3TB drives lower than 4TB ones: “The HGST Deskstar 5K3000 3 TB drives have proven to be very reliable, but expensive relative to other models (including similar 4 TB drives by HGST). The Western Digital Red 3 TB drive's annual failure rate of 7.6 per cent is a bit high but acceptable. The Seagate Barracuda 7200.14 3 TB drives are another story.”

A transition to 6TB drives is starting and Backblaze has bought 270 Western Digital Red 6TB drives and 45 6TB Seagate SATA drives. The initial failure rates look okay but “we need to run the drives longer, and see more failures, before we can get a better number.”

The Seagate 1.5TB and 3TB stats look to be something Seagate has recovered from. “All hard drives will eventually fail, but based on our environment if you are looking for good drive at a good value, it’s hard to beat the current crop of 4 TB drives from HGST and Seagate. As we get more data on the 6 TB drives, we’ll let you know.”

And we’ll be looking out for the info, you betcha. ®