'Linus Torvalds is UNFIT for the WORKPLACE!' And you've given the world what, exactly?

Plus: You're not getting the 'rate article' button back

CoTW Pirates on copyright, state surveillance and Linux – another joyous week of your comments below the line. Yup, it's Comment of the Week time.

An Anonymous Coward decided to have a go at the Linux in-crowd this week, hurling a hefty brick at Linus Torvalds after the Linux daddy said "I'm not a nice person and I don't care about you", referring to all Linux users and devs.

He is unfit for the workplace. He may well be the darling of the penguinista fanbois, but that is no excuse for him being aggressive and insulting. If he wasn't idolised so much he would have been fired a long time ago for bullying.

If Linux wants to be taken seriously, they have got to find a better poster-boy.

As for 5 days to disclosure...no wonder Linux is derided. Some people have real work to do and can't spend 24/7 sat on the command line recompiling their kernels because some amateur screwed up. Again.

At least with professional software you (usually) get updates at a predictable cadence and can plan the patches. Seems Mr Torvalds would rather have us firehose the damned things and that just won't happen.

The Great Tardmangling Machine tells us your reactions to that comment would have been rather similar to this... 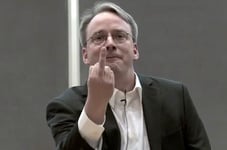 In other news, Dr Stephen Jones had this to say after reading about the EU's last Pirate Party MEP and her views on copyright:

And kick and scream like spoiled brats when they can't get it.

Maybe they didn't get enough hugs when they were children?

Silver-badged 'tard John H Woods came within a whisker of taking home the Golden Vulture Dropping this week after posting this excellent and insightful comment on an opinion piece slamming the government's attitude to increasing mass surveillance:

El Reg heartily endorses this product and/or service. Well said! (there isn't one and although there was one in the past, it ain't coming back)

Awarded to the worst comment posted on El Reg this week, three-post wonder "tech_is_BS" takes the Wooden Twig of Fail home after excreting this nutty nugget:

Boffins - the most annoying word ever. Why the hell is the Reg so in love with it?

Taking home this week's Golden Vulture Dropping of Excellence is Long John Brass, with this offering on the news that humanity had received a mysterious radio message from beyond our galaxy: