ATTACK of the FLYING MOUNTAIN: 2004 BL86 goes by like a BULLET 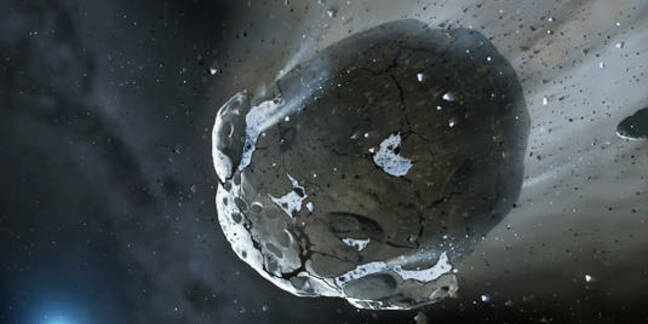 NASA has warned skywatchers that a huge asteroid will pass over European and North American skies on Monday and that it will be the biggest space rock to do a fly-by of our planet until 2027.

Most asteroids that pass us are smallish, between 50 and 100 meters wide. This latest visitor, asteroid 2004 BL86, is half a kilometer (0.3 miles) across - as big as a small mountain - which would be very damaging if it hit Earth.

Thankfully, there's no danger of that. The closest it will get is 1.2 million km (745,000 miles), or about three times the distance between our planet and the Moon. It will zoom past our planet with a relative velocity of 15 kilometres per second - more than ten times as fast as a bullet leaving the muzzle of a high powered sniper rifle.

"Monday, January 26 will be the closest asteroid 2004 BL86 will get to Earth for at least the next 200 years," said Don Yeomans, manager of NASA's Near Earth Object Program Office at the Jet Propulsion Laboratory. "And while it poses no threat to Earth for the foreseeable future, it's a relatively close approach by a relatively large asteroid, so it provides us a unique opportunity to observe and learn more."

The asteroid will be brightest at around 8pm EST (1am Tuesday UTC) in skies over Europe and North America. It won't be visible to the naked eye – ideally you should use a three or four-inch telescope.

"I may grab my favorite binoculars and give it a shot myself. Asteroids are something special," said Yeomans, who is retiring from the JPL after 16 years on the job. "Not only did asteroids provide Earth with the building blocks of life and much of its water, but in the future, they will become valuable resources for mineral ores and other vital natural resources. They will also become the fueling stops for humanity as we continue to explore our solar system. There is something about asteroids that makes me want to look up."

The fly-by will also give NASA the first detailed look at the asteroid itself. Other than its size, we know next to nothing about 2004 BL86, so the first pictures should give scientists clues as to its makeup and origins.

This really is a last-chance-to-see moment, as well. After Monday, 2004 BL86 won't be back in Earth's vicinity for the next 200 years, by which time today's stargazers will have shuffled off this mortal coil, barring some major medical advances. ®