Broadmoor: My Journey Into Hell 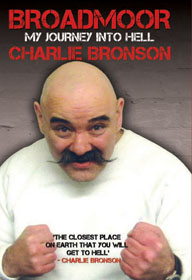 Although he's never actually killed anyone, Charlie Bronson is famed tabloid fodder, usually cited as “the most violent prisoner in the UK”, and has written seventeen books while spending nearly all of the last 40 years in one secure establishment or another.

On one level, Charlie is an old-school wideboy with an impressive pedigree: “Ruth Ellis’s sister used to do my mum’s hair”. Charlie fondly remembers the Krays, quoting Ronnie: “Madness is a gift of life, it’s how you use it that counts”.

Charlie arrives at Broadmoor from Rampton, another secure hospital and gives us the low down, the outlook is grim, apart from: “The grub was good, well cooked and plenty of it”.

Bronson, even with the help of his bride-to-be Lorraine Etherington, is not what you’d call a sophisticated narrator, but he knows his own mind and expresses himself clearly and forcefully, a lot of his book reads like the autobiography of Irvine Welsh’s Begbie.

Charlie shows an unreconstructed view of the world that is chilling and surreal in almost equal portions: “He garotted a paedo in the showers with a banjo string, how we cheered”. He recalls that “Jimmy Saville ran the entertainments ... He even gave me one of his cigars... But if I knew then what we all know now I would have taken the cunt hostage”.

Charlie’s attempts to cop off at the Broadmoor disco come undone when he finds his prospective squeeze has roasted her own baby. Yes, even big hardcase Charlie can get a tad squeamish at times.

Charlie’s struggle against the system is interspersed with documents from his prison record outlining his rooftop protests, although parts of his tale sound far-fetched. For instance, his instant access to an à la carte menu will not ring true to many who have been in secure establishments – bureaucracy simply doesn’t move that fast.

But the great thing about this book is that it presents its protagonist and the establishment in a warts-and-all style that is compelling and engaging. Charlie Bronson’s struggle against authority and imprisonment brings Henri Charrière’s Papillon to mind: the regime is less harsh, but the prospects for ultimate escape diminished.

I have not read any of Charlie Bronson’s other writing, though the couple of poems included here within Broadmoor are of the kind you can find in Inside Time most months. I doubt whether Charlie could tell any other story than his own, but the same indomitable spirit that has ensured his survival is apparent in his writing. Indeed, he discovers what is apparent to all prison scribes: “Simple little things began to become gigantic to me."

The highs and lows are beautifully captured from the ecstasy of the prison roof protest under a rainbow to the inevitable solitary confinement: “I was a vicious little fucker and Block B was the best thing for a nasty little cunt like me”.

Charlie Bronson is not a great writer, he ain’t another Genet or even Edward Bunker, but he has a unique story that is well told and well worth hearing.

As Charlie says: “All I really know is how to survive” and most poignantly and ironically: “Who wants to end up like a budgie in a cage? Not me."

This is quite simply the best prison memoir I have read for some time.