Gareth Murphy is a freelance writer and researcher for journals and think tanks. Cowboys and Indies is a history of the music industry from the inception of recorded sound up until the present day. Cowboys and Indies is a book of two halves. The history of the music business since the advent of rock’n’roll has been well covered by industry insiders and outsiders, but the early years of recorded sound are less well known.

From almost the first moment that Edouard-Leon Scott De Martinville recorded his own voice onto soot covered glass or paper, the scions of the music industry have been betraying and stitching each other up as a matter of course. 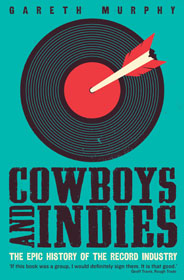 The early history of recorded music was initially a search for a medium that would last more than a couple of plays, and so in the first of the format wars the lateral disc managed to oust the wax cylinder.

The manufacturers of gramophones naturally became the first to produce records to play on their machines, which were often sold at a loss, later recouped by record sales. There followed a phase of ruinous court battles for patents which were only completed once the threat of radio started to send panic through the litigants.

The book then outlines the advent of jazz, the rise of which coincided with two catastrophic recessions, post WW1 and after the October 1929 crash.

Gareth Murphy was born in London, but seems more familiar with the US than the UK music scene, as no other nation gets a look in, for instance, the development of magnetic tape as a recording medium by Fritz Pfleumer in Germany is completely ignored.

The post WW2 scene is described from the anodyne stars of the time such as Bing, Frankie and The Andrews Sisters who shifted multiple units to the strange birth of rock’n’roll: “Memphis is built along a cultural fault line exactly where the redneck and Afro-American continental plates interlocked”.

The problem with the second half of this book is that the story has been told many times, by better writers who were closer to the action. Despite some enlightening interviewees such as Jac Holzman of Elektra records, stories of greedy men constantly fucking each other over makes boring reading.

When we move on to the British Invasion, Gareth uses poetry to overcome his own remoteness from events: “Andrew Loog Oldham stood glowing as though all of London were smiling back at him”.

At other times his ignorance is palpable: “John Lydon, a peculiar streetwise intellectual who understood that Britain’s so-called working class had long since turned into a welfare class” and the early 1980s: “A deeper sociological dimension driving demand for moody records that captured the desolation of Britain’s post-industrial decline”.

This kind of lazy revisionism may impress the sludge that dwells in think tanks, but for those of us who were around at the time, it just reads like utter tosh. Gareth Murphy’s book which started with such promise, ultimately descends into farce.

Though some of his interviewees seem similarly clueless, like the guy from Island Records who recalls that the demise of the original Wailers came from "putting too much ganja up their noses”.

I recommend borrowing this book and putting it down around the disappearance of Glenn Miller. For tales of the modern industry, you are better going direct to the sources such as Joe Boyd’s White Bicycles from the same publisher or the Glyn Johns biography Sound Man I reviewed a few weeks ago. The last sixty years of the music biz has been done much better elsewhere. ®