She's a big old unit and no mistake

Vulture at the Wheel Why did the nice man from Volvo find me peering at the dashboard with a torch when he came to collect the XC60 I was testing?

It was because I was looking very hard at the lights, which show when the left and right turn indicators are flashing.

The dashboard is a collection of LCD screens, and I was trying to decide if someone had worked hard and written code which makes a flat panel display look like an incandescent light bulb behind a bit of green plastic.

With each flash it lights and the glow spreads. It’s dimmer at the edge than the centre. This attention to detail is reflected throughout the displays. Or was it just a bulb behind some green plastic?

The eye candy behind the controls in front of the driver is very impressive. There is a fabulous level of attention to detail. There is hysteresis on the needles: that is, the area around the faux analogue speedo where the “needle” sits is a bit brighter than the rest of the arc. The indicator to show which gear you are in does a sliding transition between gears.

The user interface design shows exceptional attention to detail. Ford should learn from it. There is a meaningful relationship between the soft stuff on screens and the properly labelled buttons. 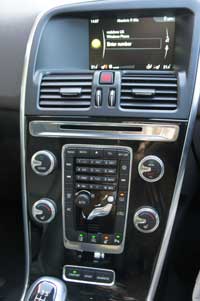 There are buttons for phone, navigation, radio etc, and then a rotary dial with OK and back buttons works through the options. The volume, menu and two (driver and passenger) heater controls all have the same appearance and jog-dial feel but there is no confusion as to what does what.

One button is labelled “my car” and behind that you get all the configuration settings such as defaults for the heated seats and which language and units should be used. That gets a bit deep but the rest is all very simple.

There is a principle of usability design called the “useability-knee” (PDF) that looks at how many functions you can add to a simple user interface before it becomes so confusing that it’s better to make the user interface more complex to start with.

As an example of this you could have three buttons with loads of menus to access fifty features or fifty buttons each of which did one thing. Both extremes are wrong. The Volvo UI judges the balance beautifully, having a great mix for hard buttons and menu options. And most of those buttons are labelled with text not icons.

Volvo could have just had one button which said “menu” and put the My Car, Media, Tel” and stuff under that, but to do so would have been confusing, particularly when you were half way through a menu and quickly wanted to switch to something such as the map to see where you were.

The menus on the screen in front of

the driver are controlled with a rotary

dial on the left stalk.

I don’t know, but I’d bet the people who worked on this have a history in gaming. The problem with designing a user interface which feels so natural is that it’s rare for anyone to notice.

This is, of course, the wrong way to look at a car. The user interface should be the adjunct to the car not the main focus, and indeed that’s true. The UI is wrapped in a rather nice chunk of metal.

No it's not, says Gartner – it's a hardcore sales tactic you can easily counter
Software7 Jul 2022 | 4

'It is possible to implement end-to-end crypto in a way that preserves privacy,' claims UK Home Sec
Security7 Jul 2022 | 14