Ex Machina – a smart, suspenseful satire of our technology gods

Film review It’s not easy to say something new about artificial intelligence in the movies. It’s pretty much a toss-up between the they-could-be-people-too argument of sweet child robot David in A.I. or the sphincter-tightening terror of HAL and the Terminator. But with Ex Machina, we get a more complex picture of our android future packaged in a wickedly smart and funny film that sends up our technology gods at the same time.

Oscar Isaac is gleefully arrogant as Nathan, the nightmare interpretation of a Steve Jobs/Elon Musk/Eric Schmidt character with more than a touch of a superiority complex. He mixes proclamations of his own godhood with heartfelt frat-boy utterances of “Dude ...” to the utterly bewildered and starstruck employee Caleb, played by Domhnall Gleeson, who believes he’s won a once-in-a-lifetime company competition to hang out with the reclusive founder for a week.

Nathan created the top search engine in the world, Bluebook, but lives in an isolated, idyllic and highly secure mountain home, where every door has to be accessed with a keycard and half the facility is underground. When Caleb shows up, Nathan is out the back beating a punch-bag. His request that Caleb skip the part of the visit where he’s nervous and awestruck is rather undermined by the fact that he didn’t come to the door to meet him or guide him through the odd security process.

It quickly becomes apparent that Caleb isn’t there just to hang out and drink beer – although there’ll be plenty of that going on with the almost perpetually drinking Nathan – he’s there to conduct the ultimate Turing Test on an android artificial intelligence dubbed Ava. And to keep track of it all, Nathan will be filming their sessions – along with pretty much everything else that goes on in the house. 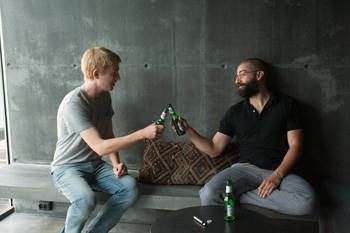 The underground lair, doors that don’t yield to Caleb’s card and the constant monitoring plunge the whole experience into claustrophobia and paranoia from the start. Caleb is no fool and quickly begins to suspect the motives and methods of Nathan, who gets steadily stranger as the experiment progresses. And, of course, there is Ava, the pretty and perplexing robot that seems to need Caleb in ways he wasn’t expecting.

Plenty of reviews have called this a smart movie, and with good reason, there’s never a moment where you aren’t second-guessing everything that’s happening and many of your guesses will turn out to be wrong. Alex Garland, in his directorial debut, telegraphs the ominous signals that all is not well right from the start, but doesn’t make it the least bit easy to figure out what exactly it is that’s wrong.

A smart, stylish thriller would be great, but Ex Machina is fantastic, largely because of the black humour that pops up just when the tension is thrumming, surprising a darkly funny laugh out of you without upsetting the growing suspense. It’s rare to say something new about AI, but it’s even rarer to watch a thriller that makes you laugh, makes you think and keeps you guessing right to the end.