A Bombe Called Christopher, or A Very Poor Imitation 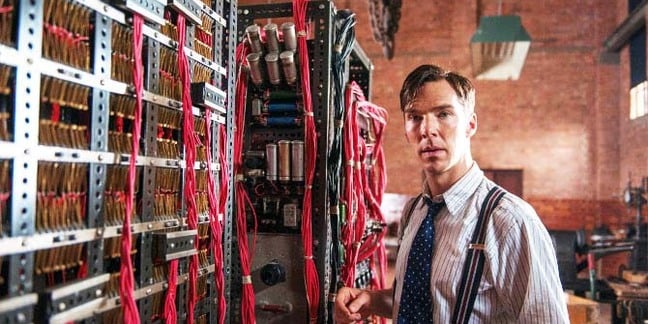 Stob Some weeks ago, on the back of superlative-laced recommendatory posts like this one, I took myself off to the Fosse des Puces high art cinema to see The Imitation Game, the new biopic about Alan "Weird Al" Turing starring Benedict Cumberbatch.

Now, I am aware that it is not entirely unknown for Hollywood to apply the odd tweak to history to render its product more palatable, but (with apologies for X-rated imagery coming up) the liberties taken by The Imitation Game extract not only the contents of the bladder but also the containing organ itself and an alarming amount of the surrounding viscera.

As well as rearranging events in a ludicrous way, the movie oozes anachronistic dialogue from every pore, reinterprets wildly the characters of the principals and generally makes free with its source material. I am not alone in such observations.

Thus when this flick triggered an Amber Warning for Oscar nominations, it seemed to me that the only decent thing to be done was to prepare a summary of the flick as I remember it for the benefit of the members of the Academy Awards committee – who are surely devoted El Reg readers to every man and woman.

If occasional minor inaccuracies have sneaked into my account then, well, I am frightfully sorry. But there is ample precedent.

CUMBERBATCH: Hi, are you good? Is this place Bletchley Park, top secret code breaking establishment founded at the beginning of World War Two? And are you its commanding officer?

CHARLES DANCE HIMSELF AS EVIL COMMANDER, contemptuously: Who are you?

CUMBERBATCH: My name is Alan Turing, of 221B King's College, Cambridge. I am the greatest living mathematician in the world. I'm here to win the war for England and her soon-to-be ally the United States.

CUMBERBATCH: Uh-oh. Which crossword compiler did you use to recruit them?

DANCE: Torquemada, in the Observer.

CUMBERBATCH: That's not cool. Fire half of them and recruit Keira Knightley instead.

DANCE, sinister: I'm afraid I can't see my way to actioning that forward.

CUMBERBATCH: Then I will so go over your head.

We see CUMBERBATCH return to his room and start writing a letter:

As he writes, we hear his thoughts in voice-over.

CUMBERBATCH in V/O: Tomorrow I shall design a new code-breaking machine...

CUMBERBATCH: ...and I shall call it C-C-C-Christopher.

A beautiful academic quad with gatehouse, cloisters, the works. YOUNG CUMBERBATCH is being nailed to the wall in proper Tomkinson fashion by a gang of bullies. All are dressed in suitable 1920s gear.

FLASHMAN, LEADER OF THE BULLIES: Say "thank you for very much for nailing me, Flashman".

YOUNG CUMBERBATCH: "Nailing me?" No way. Far too gay.

FLASHMAN: Um. Does this also imply that I am not able to refer you as a "fag"? Even if I clearly establish the Tom Brown's School Days sense of "fagging" as tedious work performed under compulsion by Key Stage Three students?

YOUNG CUMBERBATCH: Not a hope, sunshine. Not if we are going to have a shot at "Best Picture".

FLASHMAN: Sorry to harp on about this, but aren't you in fact supposed to be gay?

YOUNG CUMBERBATCH: A bit g-g-gay, but not too much. Hence Keira Knightley later on. And besides, we aren't really using much period language in this movie.

Exit Flashman, topper correctly on head, clicking his fingers and swinging his silver-topped selfie stick as though to the beat of an iGramophone.

HEADMASTER, approaching: I say, Turing, stop fannying about on that wall. I want a word with you about Christopher.

YOUNG CUMBERBATCH: He's not my friend. I'm not in love with him.

HEADMASTER: Whatever, dude. It has come to my notice that you were passing notes to Christopher in Mr Hypothetical's maths class the other day.

YOUNG CUMBERBATCH: My bad. But they were notes encrypted with a cipher. I am liking ciphers a lot. That will become significant later on.

HEADMASTER: Obvs. However, I do want you to apologise to Mr Hypothetical.

HEADMASTER: Sweet. I'm glad we cleared that up. You may go. Oh and by the way, your friend Christopher died tragically and unexpectedly during the vacation of an unusual, cough-less, bovine tuberculosis.

YOUNG CUMBERBATCH: He's not my friend.

HEADMASTER: Off to triple Latin, then, you scallywag!

YOUNG CUMBERBATCH: Can he say "scallywag"?

‘Alan Turing law’ to give posthumous pardons to 59,000 men for 'gross indecency'