Bill Gates – I WISH I was like Zuck and spoke Chinese. Yep, I drink poo 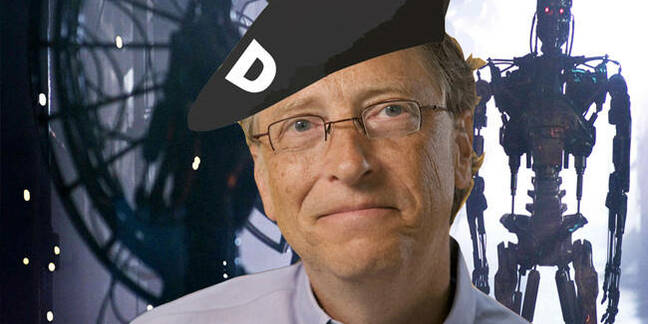 Microsoft moneybags Bill Gates feels stupid that he doesn't know any foreign languages – and wishes he had the time to learn French because he thinks it is the easiest to pick up.

That was one of a number of insights in the life of the world's richest man* on Reddit earlier today, including the fact that he spends too long reading books at night, will be supporting the Seattle Seahawks in the Superbowl this weekend, and he's concerned that super-smart robots are going to kill us all.

When it comes to languages, apparently Gates notes that he took Latin and Greek at High School, "but I wish I knew French or Arabic or Chinese." [Yeah, not like those hipster languages, Rust and Go – ed.]

Don't forget, some people thought it was amazing that Facebook CEO Mark Zuckerberg, married to a Chinese woman, had learned Mandarin and held a Q&A with Chinese students.

So what is taking up all Microsoft cofounder Gates' time, preventing him from learning how to parler français? Vaccines, drinking poo water, and worrying about robots, apparently.

His Gates Trust – one of the largest philanthropic organizations around – today put out a letter, complete with a website, arguing that "the lives of people in poor countries will improve faster in the next 15 years than at any other time in history," and gave four reasons why – falling child mortality rates; more food in Africa; more mobile banking for the poor; and better software in the world.

Gates also told one Redditor he thought it was "pretty egocentric" to think about living longer while so many people still die of malaria and tuberculosis worldwide. Nonetheless, "it would be nice to live longer," he admitted.

He is also spending a lot of time on a new Microsoft project called Personal Agent "which will remember everything and help you go back and find things and help you pick what things to pay attention to" – surely a preoccupation for a man about to hit 60.

But if there is one thing Old Bill is worried about it's the robots. Just like Mr Musk, he is concerned about what super-intelligent machines can do.

"I am in the camp that is concerned about super intelligence," he wrote. "First the machines will do a lot of jobs for us and not be super intelligent. That should be positive if we manage it well. A few decades after that though the intelligence is strong enough to be a concern. I agree with Elon Musk and some others on this and don't understand why some people are not concerned."

Don't worry Bill, you'll be long gone by then. Au revoir. Or is that adieu? ®

Updated The amber DNA in Jurassic Park? That's you, that is

Water big surprise: H2O found in samples of 'dry' asteroid brought to Earth over millions of miles by plucky probe

Parched Itokawa was hiding watery tricks up its sleeve

A dog DNA database? You must be barking

Thousands of livestock attacks give police paws for thought

Like frozen burgers, 'Bigfoot' DNA samples have a touch of horse

Astronauts sequence DNA in space for the first time

We don't usually sugar-coat the news but... Alien sugars found in Earth-bound meteorites