'Boozed up' US drone spook CRASHED UFO into US White House 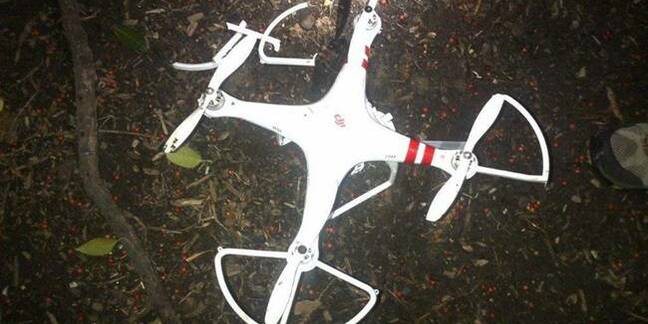 A drone crashed into the US White House because the government staffer flying the thing had hit the bottle, according to the New York Times.

The National Geospatial-Intelligence Agency employee had already 'fessed up to careering the drone into the grounds of Prez Obama's gaff, sparking a security scare. The NYT has now fleshed out the night's events, quoting officials as saying it was “nothing more than a drunken misadventure.”

In what looks to have been a good night and an epic multi-dimensional hangover, the NYT explains the unnamed party-animal was test-flying a friend's hobby drone while under the influence.

After losing sight of the drone in the darkness and rain, “he texted his friends” concerned that it had dropped in the White House grounds – and then, apparently, fell asleep.

Upon waking to the news of the security scare, with his friends telling him what had happened, the man told his employer and the Secret Service, the report states.

Because the White House radar is designed to spot larger threats, such as aircraft or missiles, the drone passed right on by.

Since the incident, President Barack Obama has instructed federal agencies to look over the issue of unmanned aerial vehicle regulation.

The officials quoted by the New York Times declined to discuss whether any disciplinary action would be taken. ®

Roundup Plus: European AI researchers to create a new lab