Analysis Hybrid array startup NexGen is starting out afresh having been spun out of SanDisk, and now faces the full competitive force of hybrid competition from both mainstream array vendors and the up-and-coming trio of Nimble, Tegile and Tintri. What are its chances?

NexGen was an iSCSI-based hybrid flash/disk array startup which used Fusion-io PCIe flash cards. In April 2013 it was bought by Fusion-io, which was subsequently bought by SanDisk, which decided it didn't want to be in the array business and spun it out via a private equity purchase.

NexGen now says it has arrived at its renewed state of independence with record fourth quarter 2014 revenues, triple digit quarter-on-quarter growth and hundreds of new customers. That all sounds pretty healthy enough.

It claims customers can "purchase ~10X less usable flash capacity while delivering ~4X lower latency versus all-flash SSD arrays" – a bold claim indeed. Another is that it delivers four-times lower $/VM cost than leading (unspecified) hybrid arrays – something its channel partners will be happy to demonstrate we suppose.

Nexgen has updated the original 3-box n5-nnn product line to a 4-box N5-nnn set with greater flash and disk capacities and more performance. The core attributes of this literally next generation of its technology are a flash caching scheme with settable app-aware quality of service (QoS) policies, and the use of PCIe flash; faster than SSDs and not taking up drive bays like SSDs.

At a simple level the N5 arrays are 3U, dual controller, active-active, hybrid arrays with an iSCSI interface. The flash is installed as SanDisk (Fusion-io) PCIe flash cards and functions as a read and write cache. Performance can be increased by adding more PCIe flash and capacity by adding disk packs (16-slot shelves).

There can be two or four (SanDisk/Fusion-io) PCIe flash cards. Data is mirrored between PCIe flash cards on the two storage controllers. Writes go first to the mirrored flash cards, get acknowledged, and are then transferred to disk (evicted) if not being accessed.

Data on disk is striped and stored on RAID 6, hot-swap drives.

We understand that the full list of possible data locations runs from memory, through NVDIMMs (like Nimble Storage basically), PCIe flash and disk.

A quick look at some details of the old (n5-nnn) and new (N5-nnn) product lines shows up some differences in capacities and IOPS. 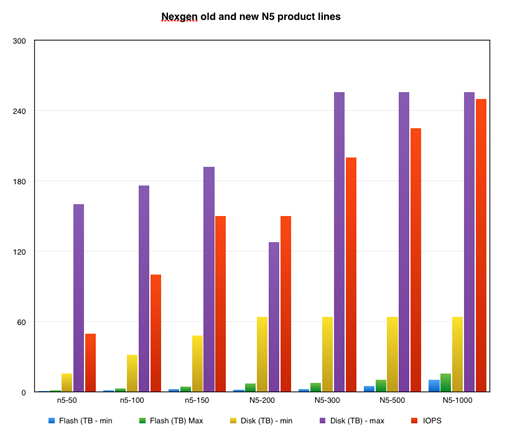 A table below lists the numbers from which the chart is derived:

It is worth looking at the QoS side in more detail.

These higher IOPS numbers affect the quality of service available.