* This headline brought to you by the cable companies

US internet tinkerer the FCC will likely vote tomorrow to change its definition of "broadband" connections from 4Mbps to 25Mbps – effectively moving 13 per cent of the American population outside the envelope of "fast" internet access.

An internet connection slower than 25Mbps can't be touted as a broadband product, if the decision is made. The idea behind the move is to force an increase in speeds and competition across the country.

With the current 4Mbps down, 1Mbps up definition, just 6.3 per cent of households have no access to a sufficiently fast service. But bump that up to 25Mbps down, 3Mbps up and 19.4 per cent are suddenly unable to get "broadband."

You can see from the graph below that the situation gets even more dire when you consider the issue of competition, if you take that to mean having an option of more than one supplier. Under the current definition, 25.2 per cent of people have either no option at all or no competition – which is a very high figure and significantly behind most of the rest of the Western world. 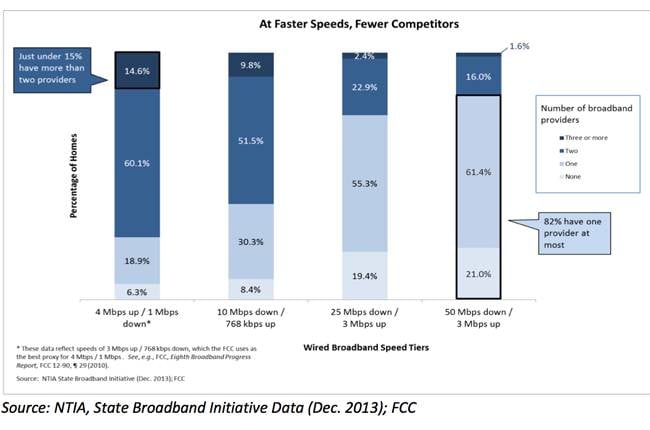 Speed and availability across the US. Not so great

The United States comes 12th globally in terms of average internet speed (11.5Mbps) and 14th in terms of the percentage of the population with speeds above 10Mbps (39 per cent), according to the latest figures from Akamai.

But, critically, the US comes 39th globally with the percentage of population above 4Mbps. And it is that severe drop in availability that the FCC is trying to tackle. Under its proposed 25Mbps definition, the percentage of households that have either no option or no competition leaps to 74.7 per cent.

Aside from the obvious shaming aspect of shifting the broadband definition – in this case making it clear that American cable companies continue to provide below-par speeds to huge swathes of the country – the change would provide the FCC with actual legal power to force changes to the market.

Under section 706 of the Telecommunications Act, made famous by the recent net neutrality debate, the FCC has the authority to increase competition and rollout of network access across the country. With 75 per cent of the nation facing no real competition, the commission can use its mandate to force cable companies to allow others into the market. It can also pressure companies to increase their rollout of new networks or improved networks.

And it can push back on issues such as net neutrality and the municipal broadband, which cable companies have been aggressively challenging through the courts.

Unsurprisingly this effort has not been met with open arms from the companies that the FCC intends to pressure into providing more and broader services.

In its submission to the FCC's comment period, the National Cable and Telecommunications Association (NCTA) said that people simply didn't need 25Mbps, complaining about the "hypothetical use cases" that would explain why that speed would be useful and noting that they "dramatically exaggerate the amount of bandwidth needed by the typical broadband user."

Despite that line of reasoning, however, the FCC is expected to go forward tomorrow, opening the door for faster speeds and greater competition. Or, as the cable industry would likely paint it, cutting 41 million people off broadband. ®