Synths of the father: Making some noise at NAMM 2015

You don't know what it was like, man, you weren't there

+Vids If you want to get an idea of how pop music will be sounding in 2015, then this year's exhibition of the National Association of Music Merchants, better known as the NAMM Show, that took place in California last week was the place to be – think of it as CES for musos. 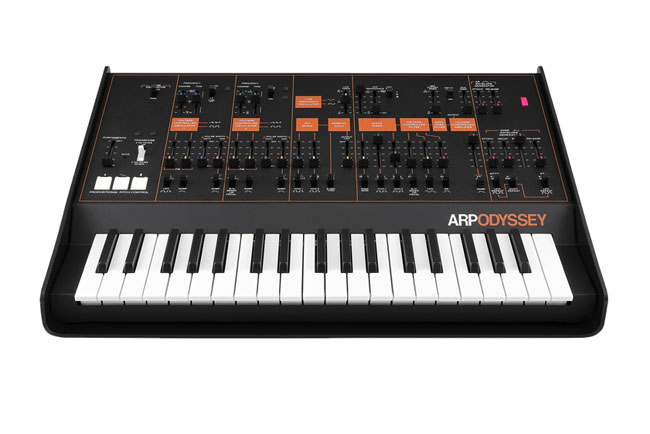 The theme of this year’s NAMM show was not difficult to spot, starting with Korg’s launch of an ARP synth, the Odyssey, that dates back to 1972. A spate analogue-inspired reissues of recent years has tended to improve on the spec of classic designs by increasing polyphony or adding velocity sensitivity.

However, the only thing which Korg has changed is the cosmetic look, opting to imitate the livery of much later products in black (with orange markings) instead of the insipid beige of the early Odysseys or the black with grey writings of the later ones. You do, of course, get MIDI and USB control thrown in too, plus a headphone socket and balanced XLR outputs.

ARP Odyssey synths past and present

Interestingly, ARP went out of business without anyone acquiring the rights to the designs. Opinion at the show was divided as to whether the reissue of another company’s product was a waste of time (the modernists) or the greatest thing ever (the classic aficionados).

Over on “MIDI daddy” Dave Smith’s booth, he was pleased to announce that he had reacquired the right to use the name Sequential for his designs – he had sold the original Sequential Circuits to Yamaha in the late 1980s when its fortunes were failing.

More significant though, was news that his latest take on his classic synth family, the Prophet 6 – the Prophet 5 being the most successful polysynth his former company ever produced – had actually gone back to discrete analogue circuitry. A volte-face that will delight the purists as some of his earlier Dave Smith products used digital circuitry to emulate the original analogue sound.

Smith stated that this was in response to user demand, as many people remarked that his earlier efforts just didn’t have the same analogue warmth. The same is true of his new Pro-Two; again, analogue circuitry but with the addition of memories, which its predecessor the Sequential Circuits Pro-One – its best selling monosynth from in the 1980s – had never had. To my way of thinking this is the best of both worlds, analogue warmth and digital reliability.