Chasing the Scream: The First and Last Days of the War on Drugs

Johann Hari is most notorious as the ex-Independent journalist who left the paper after having been discovered to have built his entire career on plagiarism. Chasing the Scream is a story motivated by close friends of the author succumbing to addiction.

Johann Hari introduces the century-old war on drugs through three characters: Harry Anslinger, the archetypal narc, Arnold Rothstein, the original drug gangster and Billie Holliday, the celeb addict. It all starts to get a bit vintage Pulp Fiction, James Ellroy or William Burroughs. Johann evidently has a penchant to fictionalise.

Even so, Hari is a talented writer, though, as is common with journalists, he does tend to push all the human interest buttons at once. His argument is persuasive, insistent and a tad preachy; his prose, though well formed, is too much in-your-face, as there is a lack of irony and nuance.

Hari travels to ghettos, drug frontier towns and most of the current areas of recent legalisation. He meets many dedicated and inspiring individuals, such as Dr Bruce Alexander of Vancouver who equates addiction with dislocated individuals cut off from meaning: “The inner void is not limited to people who become drug addicts, but afflicts the vast majority of people of the late modern era” and former addict Dean Wilson, who tells us “Addiction is a disease of loneliness”. 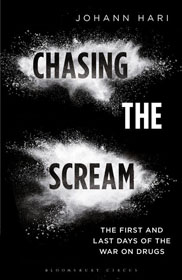 There are many bereaved relatives and casualties of the drug wars who are lined up to support the argument. Hari’s visits to Colorado, Washington, Portugal and Uruguay would seem to indicate that even doubters, such as right wing politicians and police chiefs, are now positive about the local effects of legalisation.

Hari’s argument would seem to be won and we are just waiting for legislators with the guts to make changes. So what is the point in this book? Degenerates, hedonists and libertines don’t need a manifesto. On the cover, Russell Brand describes Chasing The Scream as: “Intoxicatingly thrilling” which begs the question: what drugs is he on?

Naomi Klein, Elton John, Noam Chomsky and Stephen Fry, all the luvvies love it. According to the latter it’s “Screamingly addictive”. If this book isn’t designed to derange the senses of the liberal left, then it is doing a mighty fine job.

Chasing the Scream has an impressive narrative, that will, I think, appeal to few at the coal face, as it is too showbiz for the sociologists. Hari is one to linger in on the poignant soundbite and his subject is in danger of becoming a pet celeb charity in places. It is likely to confirm the prejudices of liberal journalists and would-be liberal journalists, dwellers in think tanks that dress to the left and that ilk.

It is not badly written and I agree with most of what he says. Yet his inability to assess his own penchant for narcolepsy medication against other’s stimulant abuse is rather telling. He is kind of righteously annoying, too ready to mount his soapbox and with a prose style that gives you little space to think for yourself.

Indeed, Hari seems a broad rather than a deep writer, and his talents would probably serve him better on TV or writing polemic for new left politicians. This is a strange book, well written with a compelling argument, yet curiously uninspiring as a read. By the end my human interest buttons were all but exhausted and I craved another spliff. ®