Scientists believe that a recently discovered Martian meteorite – dubbed Black Beauty – is representative of the "bulk background" of rocks on the surface of Mars.

The 4.4 billion-year-old space stone, known as NWA7034, was found in the Moroccan desert several years ago. 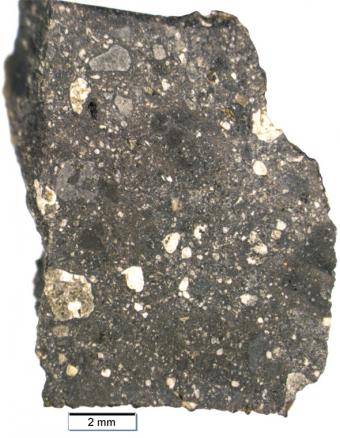 Now, new research based on analysis of the rock apparently lends weight to the claim that Black Beauty is very similar to "vast swaths" of Mars' crust.

Boffins from Rhode Island's Brown University and the University of New Mexico have published their findings in the journal Icarus.

The space stone is the first such sample to match the "chemical makeup of rocks analysed by the Mars rovers." Unsurprisingly, then, researchers have pored over the Martian meteorite for four years now.

For this particular study, Kevin Cannon, Jack Mustard and Carl Agee acquired a chip of Black Beauty before using a number of spectroscopic techniques to analyse it.

“Other techniques give us measurements of a dime-sized spot. What we wanted to do was get an average for the entire sample. That overall measurement was what ended up matching the orbital data,” said Cannon.

Dark plains on Mars are understood to be "dust-poor regions", which led the scientists to surmise that Black Beauty-like breccias were dominant on the planet.

Mustard said that the bulk of rocks on the surface of Mars were probably similar to the "dark, messy and beautiful" makeup of NWA7034.

“This is showing that if you went to Mars and picked up a chunk of crust, you’d expect it to be heavily beat up, battered, broken apart and put back together,” added Cannon. ®

Space boffins: Nevermind ekeing out the battery, let it go out in a blaze of glory!
Science22 Jun 2022 | 7