Watt the CHIP!? ARM pops out THE most powerful 64-bit Cortex for mobes'n'slabs

Blueprints for A72 cores slash power use 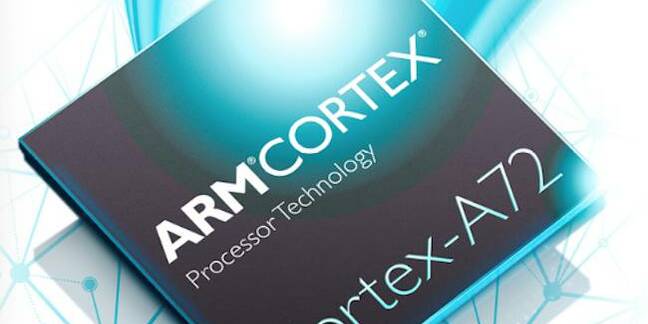 ARM today reveals its most impressive design yet: the 64-bit Cortex-A72 processor core, aimed at giving next year's smartphones and tablets extra oomph for games and such.

We're told a 16nm A72 has about twice the performance of a 20nm Cortex-A57, and consumes about half the power. Chip manufacturers are expected to package four A72s and four Cortex-A53s into system-on-chips for high-end handhelds in 2016.

Nandan Nayampally, vice-president of marketing for ARM's CPU Group, told The Register an octo-core big.LITTLE system-on-chip, with all its peripheral electronics, should consume between 2 and 2.5W sustained; sometimes it'll be higher, sometimes lower depending on what's running. A single core going full-tilt will draw 0.5W, although this is rare and the smaller cores won't gobble that much, we're told.

"We have a strict power budget; this is a fanless design," he added.

The A72 can run ARMv7 32-bit and ARMv8-A 64-bit code, and includes the usual TrustZone, hardware virtualization support, and so on. It can be scaled up to four cores per processor cluster.

TSMC, among other chip manufacturers, is due to churn out 16nm FinFET+ A72 system-on-chips in the first half of 2016. The cores can be clocked up to 2.5GHz, although ARM's keen to stress that a lot of the performance boost and power-use cuts come from changes to the microarchitecture and process shrink, rather than just jacking up the core clock.

The A72's designs – the RTL – are already in the hands of ARM's licensees, we're told, and the quoted benchmark speed increases are apparently from a glob of workload measurements and standard tests. More than 10 companies have apparently licensed the A72 blueprints from ARM, headquartered in Cambridge, UK.

Another ARM exec told The Register more technical data will be shared following a briefing today in San Francisco with semiconductor analysts and press.

To put the A72 in context, the A57 today is ARM's flagship 64-bit core, and found in processors like Qualcomm's top-of-the-line (and Samsung snubbed) Snapdragon 810 and AMD's lightweight 64-bit ARM Seattle server chips and virtual networking silicon.

Some, and we're imagining execs at TSMC and AMD here, tout the A57 as server class. ARM's decision to pitch its followup, today's A72, squarely at smartphones and tablets could be seen as the equivalent of shoving data center tech into your pocket. An A72 phablet in your hand should be all the compute you need, is the message.

Yet the Cortex-A57 and A72 are just cores: the A57 is in silicon from AMD's Seattle to Samsung's Exynos 5433 tablet SoC. It's not a data center-specific design. And the A72 is a smaller, faster, leaner version of the A57. It's a smartphone chip for smartphones, essentially.

A new ARM CoreLink cache coherent interconnect, the CCI-500, is also coming to hook the fat A72 cores to smaller Cortex-A cores, such is ARM's multiprocessor architecture big.LITTLE. As processor cores ramp up in performance, keeping the rest of the system – from the RAM to the caches – up to speed is essential. The CCI-500 "delivers double the peak memory system bandwidth" of the CCI-400.

Finally, there's an ARM Mali T880 graphics core design that can drive 4K displays at 120fps from eight cores. It's a touch under twice as fast, in terms of graphics performance, as the previous Mali T760 – again, according to the Cambridge-based biz itself. ®