EMC pulls out VSPEX: I'll hyper-converge you in a minute

Taking the EVO: RAILway to a NetApp and Cisco smackdown

VSPEX is for EMC's partners so they can build converged systems themselves. VSPEX BLUE takes the scheme further by using VMware's EVO: RAIL concept.

It is a hyper-converged infrastructure appliance (HCIA) and EMC says it enables customers to go from power-on to provisioning virtual machines in under 15 minutes. It features:

Via ESRS, EMC can periodically remotely monitor a VSPEX BLUE appliance. It will be "notified of failure enabling support to take preventative measures to help avoid downtime." EMC 24x7 Support can be coupled with ESRS. All appliance hardware and software support problems are handled by EMC. 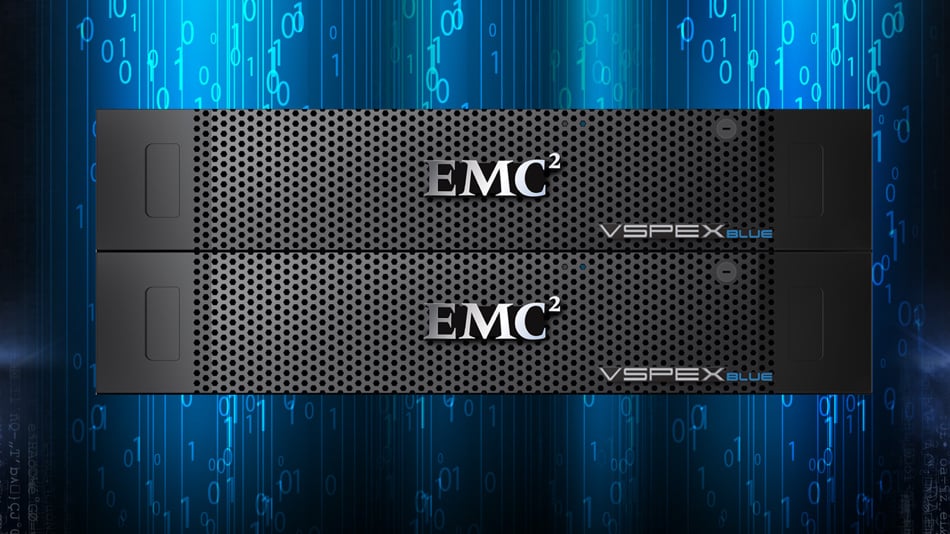 The Manager software is based on the EVO:RAIL Deployment, Configuration and Management (DCM) Engine, and adds Market, a facility providing customers access to software titles and products from an EMC interface that's similar to EVO: RAIL's.

It's intended as a one-stop facility through which customers can "download value-added software, [and] purchase upgrades and appliances from EMC and EMC ecosystem partners."

The software is developed by EMC and technology partners, validated for the VSPEX BLUE appliance, and made available to download. On announcement the list includes:

There's a self-service support aspect to the Manager software as "users can conveniently access electronic services, such as EMC knowledge base articles, access a wealth of community-sourced online and real time information and familiarise themselves with EMC best practices for optimal appliance operations."

In other words EMC is adding a wealth of extra stuff to make its EVO: RAIL system stand out from everyone else's.

Where does the BLUE in the name come from? Will there be other colours? An EMC spokesperson said; "The name, VSPEX BLUE, is an updated version of VSPEX and the colour coincides with EMC’s logo which is blue. EMC has no plans to introduce other colours."

EMC may find ... demand for a turnkey hyperconverged appliance, offered directly from EMC, may outpace that delivered by its partners via VSPEX reference architecture. A further complication may arise in how EMC differentiates a Vblock solution (from VCE), VSPEX and a ScaleIO appliance. It will also need to provide clarity on how it positions ScaleIO (and VSPEX) alongside VMware Virtual SAN (VSAN) (and EVO program).

Asked about VSPEX BLUE, Dheeraj Pandey, CEO of Nutanix, said: "[It] looks like EMC will now put ScaleIO to sleep. Otherwise, the multitude of single-trick products in EMC's ever-confusing product portfolio - with an increasingly incoherent architecture - is a massive strain on the customer, and an antithesis of convergence. A marketecture of ViPR vapourware on top only makes it worse. The IDC's report on hyperconvergence corroborates our observations on ScaleIO's lackluster performance in the market."

EMC II president Chad Sakac says both ScaleIO and VSAN have separate use cases: "BTW there's no weirdness here from my viewpoint: if you want SDS (software-defined storage) primary storage, your choices are great - if you want VMware-embedded and VMware-only, VSAN rocks. Conversely, if you want SDS open to different use cases (including VMware) and host types (but by definition less integrated), ScaleIO rocks."

The Omnicube Accelerator is a proprietary PCIe card with an ASIC to help in deduplication and compression.

He said; "From an efficiency perspective, the promise of hyperconvergence is running all infrastructure services on a shared pool of x86 resources, as native functions of a single holistic technology. Running disparate software products on the same scarce Intel processors that also support the business applications is inefficient and undermines performance."

For any proposed deployment that can be checked with a bake-off between the OmniCube and VSPEX BLUE systems.

VSPEX BLUE is available only through distribution partners Arrow, Avnet, Networld, TD Azlan, Tech Data and others from February 17 onwards. We have no pricing information. ®

Opinion Of all the non-carbon energy options we have, this is the only one which can keep the lights on
Science15 Aug 2022 | 20