Survey of what drives debate

Both sides of the climate change debate tend towards group conciousness and define their positions based, in part, on hating the other side of the argument, according to a letter published in Nature: Climate Change.

Public division about climate change rooted in conflicting socio-political identities(PDF), penned by folks from Monash University, the University of Western Sydney, Murdoch University and Flinders University is based on an online survey conducted among a random sample of US residents, 120 of whom identified as climate change sceptics and 328 as believers .

The paper posits that debate about climate change might be “an intergroup conflict between two groups with conflicting views … (rather than between scientists and sections of the public). The authors therefore tried to assess respondents' “social identification” with others who share their view and level of anger with their ideological opponents. The survey also tried to examine “group efficacy beliefs”, a measure of faith in one's chosen cause.

“We found the contrasting opinions of believers and sceptics about the causes of climate change provided the basis of social identities that define who they are, what they stand for, and who they stand with (and against),” said one of the letter's authors, Dr Ana-Maria Bliuc from Monash University's School of Social Sciences. And once one's identity is defined in part by taking sides in a debate, both sceptics and believers become so emotionally invested in their cause, and so determined to override their opponents arguments, that debate descends into an increasingly noisy and acrimonious cycle.

“An integrated cluster of group consciousness factors comprising identification with these groups, anger at the opposing group and beliefs that the group can achieve its political goal through collective action predicted political action intentions and actually politically relevant behaviour,” the letter suggests. 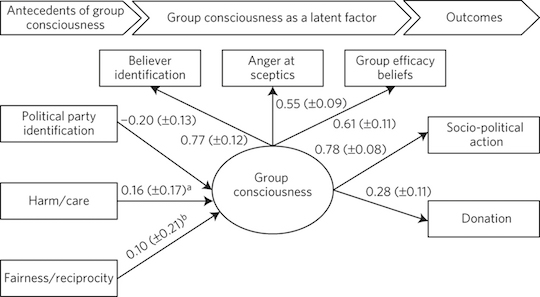 This is a climate change believer's brain

Dr Bliuc suggests that it's necessary to take the heat out of the climate change argument to advance it.

“Strategies for building support for mitigation policies should go beyond attempts to improve the public’s understanding of science, to include approaches that will change the relationship between the two groups,” she suggests. 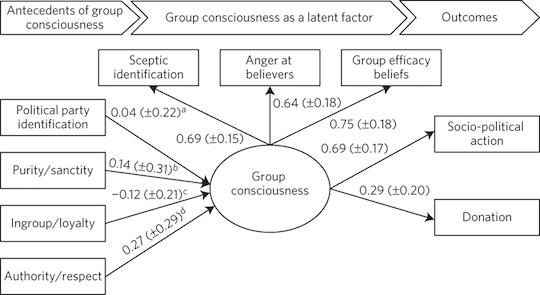 No way is this how climate change sceptics think.