VMware’s storage interface dominance over hardware and software storage suppliers has never been more evident than in the rush by storage firms to support its v6.0 vSphere and Virtual SAN products announced yesterday.

Virtual SAN v6 adds features that storage array and software suppliers are keen to support such as:

Dell, HP, Nexenta and NexGen are adding, or have already added, support for the latest vSphere features.

Dell’s latest generation of PowerEdge servers, with 12Gbit/s SAS controllers, are certified for VSAN 6. It is also releasing the VVOLs (Virtual Volumes) feature to Dell Storage EqualLogic PS Series customers, at no additional cost. With it:

Dell is developing reference architectures and documentation to guide its customers as they adopt VVOLs. Compellent SC array customers will have to wait for a while.

HP is a vSphere 6 and VVOLs fan, with all 3PAR StorServ arrays supporting both at day one, and supporting up to 64,000 virtual volume objects. The StoreVirtual, MSA and XP storage arrays will also support the two VMware products. With this support quality-of-service parameters can be applied individually to a specific VM (virtual machine) instead of a group of VMs, provided the underlying capability is available on the storage array as it is on 3PAR arrays.

It says NexentaConnect operates with and augments VSAN 6 by adding “Windows and UNIX-based file services without the need for any additional hardware,” also mentioning that it uses “local storage in servers to deliver high-performance NFS and SMB file services to virtual machines and virtual desktops, all managed through a single VMware vCentre Server console.”

Hybrid array supplier and SanDisk spin-off NexGen will add VVOL support to its N5 arrays, telling us it has “engineered the ability to surface NexGen ioControl performance Quality of Service (QoS) policies and service levels in VMware vCenter.”

N5 array VVOL support will come in the second quarter of this year.

This NAND company has got itself an all-flash VSAN 6 architecture encompassing the starting 4-node cluster and scaling up to 64 nodes. SanDisk says it uses its Lightning Gen. II 12Gbit/s SAS SSDs for caching and and CloudSpeed SATA SSDs for persistent storage. 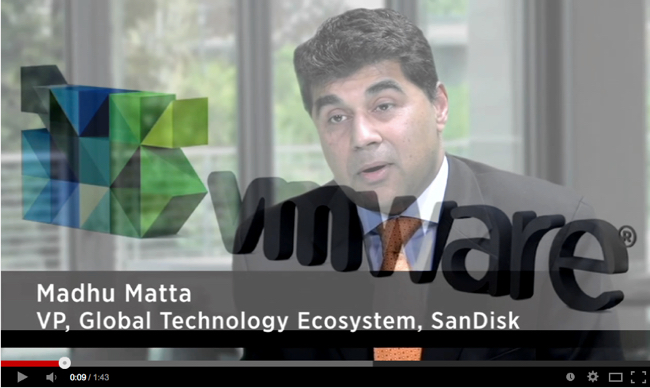 VMware worked with SanDisk n the development of vSphere APIs for IO Filtering, and SanDisk’s FlashSoft caching software uses the new APIs to provide flash caching for vSphere 6. A SanDisk VP, Madhu Matta, talks about SanDisk and VSAN clusters on a Youtube video.

All this is good news for VMware customers using Dell, HP, Nexenta and SanDisk storage OEMs' storage. As soon as they upgrade to vSphere 6 their PS, 3PAR and Nexenta Connect storage can start out on their VVOL voyages. SanDisk OEMs can also go play in the vSphere 6 and VVOLs pool touting all-flash speed and power/space-efficiency.

NexGen users are a couple of months behind – no big deal in the overall scheme of things. ®