A lot of in-house flacks are probably panicking right now

Here we are with an on-premises VMware Virtual SAN 6 and vSphere 6 VVOLs announcement frenzy going on. Edelman says “nuts”* to all that and has its users in 68 offices around the globe store and access their files in Redmond’s Azure cloud.

The doorway through which they pass is provided by Nasuni, which is crowing about it via a press release saying it has “displaced a very large, traditional storage firm at the world’s largest PR firm, Edelman Worldwide … Edelman is putting all of its file storage in the cloud (specifically Microsoft Azure) via the Nasuni Service.”

Why the switch from on-premises arrays to the cloud? A 50 per cent cut in annual storage and data protection costs, with it being all OPEX and no CAPEX, helped, together with Nasuni adding global synchronisation, automatic backup every five minutes, instant restore and central management which Edelman couldn’t get with its traditional infrastructure. 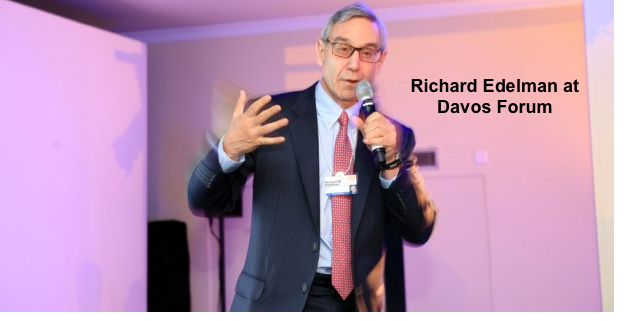 Richard Edelman of the eponymous PR firm at Davos.

Also, cloud pay-as-you-use-and-grow attributes helped, as no upfront array capacity purchases are needed. Nasuni crowed over this, saying that Edelman “was considering a refresh of its global data protection infrastructure. But given Edelman’s three-year data growth projections, a traditional vendor would have required the firm to buy almost twice the capacity it needed up front.”

Ben Ribaudo, senior veep for global infrastructure at Edelman, has a quote in Nasuni’s press release: “For less than half of what we would have had to spend to upgrade our existing data protection infrastructure alone, we get centralised storage management and global file synchronisation …. we don’t have to make a big capital spend on day one and scaling over time is simple and affordable.”

Nasuni says Edelman’s users “don’t notice any difference, because it looks just like the traditional Z: drive they already know, except for the fact that it performs far better than before.”

Nasuni CEO Andres Rodriguez had a big picture marketing message: “Whether they’re in PR, advertising or publishing, media companies are all experiencing the same challenges: data is growing faster than the traditional storage infrastructure can scale.”

Edelman is the world’s largest PR firm and its voted for cloud storage with its own money, a much stronger endorsement than if it was pushing the PR interests of a cloud storage client. How nice for Nasuni; free PR in a way. Now that is really neat. ®

* A historical footnote that may interest some readers is the historical use of the riposte “nuts” by US Army Brigadier Anthony McAuliffe in refusing an invitation to surrender sent by a German unit during WWII, as recounted in detail on the US army website.

Despite 'key' partnership with AWS, Meta taps up Microsoft Azure for AI work

Arm, Microsoft at pains to say this CPU arch can be trusted with real server work