Researchers at University College London say they have found a way to dramatically increase the distance data can be sent intact over ordinary fiber optic cables – by partially working around the Kerr Effect.

A phenomenon discovered by Scottish physicist John Kerr in 1875 limits the distance coherent data can travel. The effect Kerr noticed was that the refractive index of materials changes in response to an electric field, which distorts the transmitted information, and places a cap on how far data can travel along a glass fiber without the use of repeater stations.

These repeater stations are a major inconvenience and points of failure when you're laying undersea data cables. By using a new type of receiver and refined signal-processing algorithms, the team claims they can sustain vastly better performance along unmodified cables.

This means communications around the planet can be improved, in theory, without having to lay down super-expensive new undersea cables – which connect networks across the world. Instead, the end points can be upgraded to reduce errors and improve signal quality, possibly allowing the reliable transfer of more information per second around Earth.

Crucially, future cables can be even longer than today's without having to install lots of annoying repeaters.

"By eliminating the interactions between the optical channels, we are able to double the distance signals can be transmitted error-free, from 3190km to 5890km, which is the largest increase ever reported for this system architecture," said Dr Robert Maher, from UCL's electronic and electrical engineering department.

"The challenge is to devise a technique to simultaneously capture a group of optical channels, known as a super-channel, with a single receiver. This allows us to undo the distortion by sending the data channels back on a virtual digital journey at the same time."

That 5890km distance, 3659 miles, is enough to stretch from London, England, to New York City, US, without a repeater.

The research, to be published in the journal Scientific Reports, used a "DP-16QAM super-channel, consisting of seven spectrally shaped 10GBd sub-carriers spaced at the Nyquist frequency" within a single cable.

A super-receiver allowed the boffins to pick up the signal clearly over the great distance. The team used 81.8km of Corning SMF-28H ultra low-loss fiber to test their design. 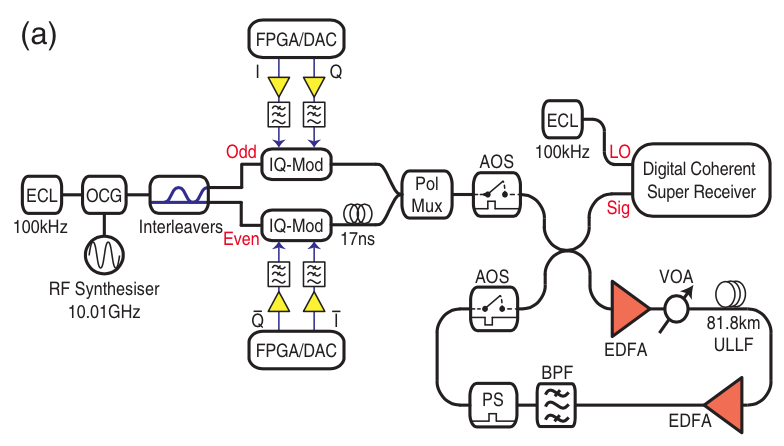 (a) The set up of the experiment ... from the paper

The paper – you can read it here [PDF] – is chock full of the science behind the claims; its abstract reads:

The achievable transmission capacity of conventional optical fibre communication systems is limited by nonlinear distortions due to the Kerr effect and the difficulty in modulating the optical field to effectively use the available fibre bandwidth. In order to achieve a high information spectral density (ISD), while simultaneously maintaining transmission reach, multi-channel fibre nonlinearity compensation and spectrally efficient data encoding must be utilised.

[Our] technique is combined with an optimised forward error correction implementation to demonstrate a record gain in transmission reach of 85%; increasing the maximum transmission distance from 3190 km to 5890 km, with an ISD of 6.60 b/s/Hz.

"Our method greatly improves the efficiency of transmission of data – almost doubling the transmission distances that can be achieved, with the potential to make significant savings over current state-of-the art commercial systems," said paper coauthor Professor Polina Bayvel, professor of optical communications at UCL.

"One of the biggest global challenges we face is how to maintain communications with demand for the Internet booming - overcoming the capacity limits of optical fibre cables is a large part of solving that problem."

The team now wants to find out whether the same techniques can be used on more everyday tech such as digital cable TV, cable broadband, and fast Ethernet connections. ®