A 6TB Helium-filled drive from HGST costs $120 more than a traditional 6TB drive from Seagate.

That makes a $120 - $130 list price difference. We checked online ourselves and confirmed Rakers' figures. 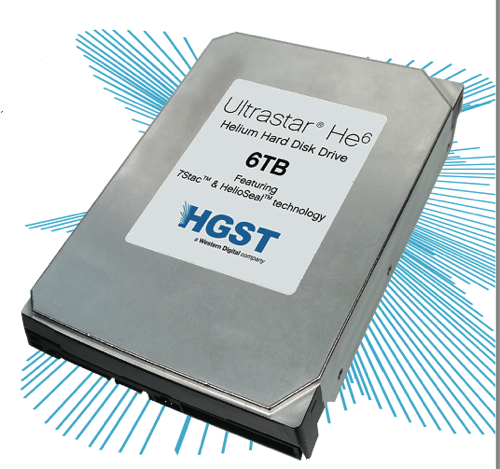 The Seagate drive has six platters, according to our understanding, while the HGST one has seven.

Rakers says Seagate was unable to fulfil the strong demand for its 6TB drives in the latest quarter. Such a drive takes more than three months for components to pass through the supply chain; a 6TB+ HDD requires up to 20+ weeks of supply chain – 13-14 weeks for heads (wafer-to-head production) and 3+ weeks of test cycles.

We can expect a product announcement blitz over the next five months as Seagate aims to refresh almost its entire product portfolio over the next two quarters.

Curiously about 80 per cent of Xyratex storage enclosures shipped to OEMS by Seagate have no disk drives inside them. Only some 20 per cent are fully loaded. That has to be an incremental opportunity for Seagate to ship extra drives.

Given Seagate's relationship with Samsung, that might mean we're going to see hybrid disk drives from Seagate with slugs of 3D V-NAND inside them.

We might suppose such drives would have large amounts of NAND and at a lower cost/GB than current planar NAND hybrid spinners. ®