The Interview? Kim Jong-Un, you really shouldn’t have bothered

Not satirical, and the toilet humour is no such thing

Film review North Korea really didn’t need to go to the trouble of hacking Sony Pictures over The Interview – even if it did have anything to do with it.

The Democratic People's Republic of Korea should have just objected to the movie on the basis of good taste (and the possession of a sense of humour) and it would have been a fair argument.

The Interview is yet another example of the kind of lazy, offensive “comedy” that actually good gross-out knife-edge comedies (such as Dodgeball and Team America: World Police) have made possible.

There’s a whole host of people that’ll tell you that comedy can’t be insulting – by its very nature, it’s a joke, therefore it’s not an insult. What they forget is, if it’s not funny, it’s just sort of sad and offensive.

There are moments when James Franco’s ego-maniacal capering as Dave Skylark, the star of an entertainment news show, are genuinely funny, simultaneously poking fun at his own off-screen persona, entertainment news and serious journalism. 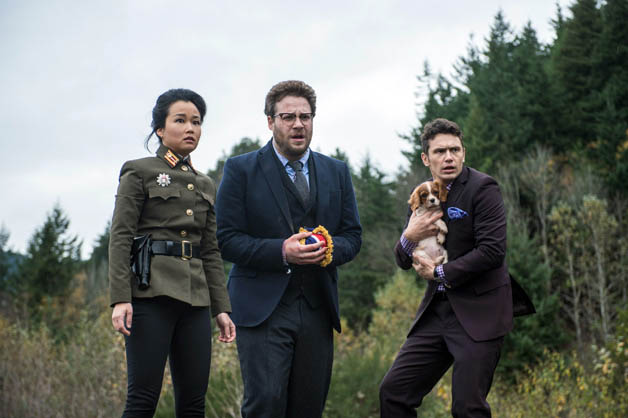 James Franco and Seth Rogen in a still from The Interview. Look how cute that puppy is

And there are times when Seth Rogen’s producer Aaron Rapoport, yearning to be taken seriously, but sucked into the idiot vortex of his best friend’s lunacy, is mildly amusing.

But those times just make the rest of this ridiculous film even more annoying. It should have been easy to make fun of North Korea. Instead, we get laboured, overworked jokes about there being plenty of fat kids in the country and a dictator asking if margaritas are gay and singing Katy Perry in a sad echo of the excellent “I’m So Ronery” sequence found in Team America: World Police.

The CIA is surely always good for a few laughs, but here a vastly underused Lizzy Caplan as Agent Lacey is literally left simpering on the sidelines by the end.

The hot intelligent woman ending up with the bumbling hero-type was an oldie when Leslie Nielsen was making Naked Gun movies, but it can still be funny – just not in this film.

The best parts of the film are carried off by the support cast, Randall Park as Kim Jong-Un and Diana Bang as Sook Yung Park, the communications liaison officer and chief propagandist.

Park’s mixture of Mafioso don and frat-boy partying give a nice mental edge to the crazed dictator, even if he is mostly emulating the conflicted persona made famous by a puppet. Meanwhile, Bang’s wide-eyed straight-man play does a lot with the very little she’s given as Rogen’s love interest.

But it’s not enough to save this hodge-podge mess that can’t decide if it wants to say something about America’s global military manoeuvres and North Korea’s human rights issues, the media and feminism – or it just wants to stick with gorily blowing things up and shoving huge phallic metal canisters up people’s arses.

Rogen and Franco’s idea was a good one and it’s enough for a few laughs, but they badly needed to be reined in a bit and forced to give a bit a more thought as to how to marry toilet humour to satire without losing momentum. ®