Unless you're in India, it seems

There's been some recent experiments on this point in India. I've been sent the book which describes them. And it most certainly works in those specific circumstances. However, those circumstances are pretty special. The Indian poverty alleviation system is a near insane one of buying up food at guaranteed prices then distributing it through a special series of shops. 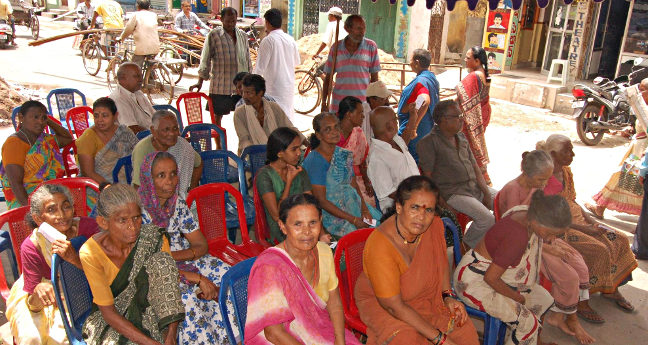 Poverty: Indians queue for a political party-sponsored medical checkup. The same thing happens in some areas with food handouts

By the time it gets to villages, grain might be priced at one twentieth of the market price. Great for the poor if it arrives: but, as you can imagine, not a lot of the grain that should arrive actually does. Much of it ends up in the market at 20 times the subsidised price. The same is true of cooking oil... and so on with different foodstuffs.

Part of the reason a basic income works in India is because the current system is so inefficient. Another to be wary of is that this was obviously a test. And so was rather better monitored than something will be when it's rolled out to hundreds of millions of people.

However, two very interesting points from the study. The first being that people do value liquidity. Many to most Indian peasants are living under heavy debt burdens. But the influx of cash, even if it could have led to their paying off all debt, didn't lead to their doing so. They would maintain some cash savings and also keep some debt open. This was done in the sort of amounts that leaves cash ready for emergencies: liquidity in other words.

This, then, feeds through very closely to that thing that the left here say that people value: agency. Instead of getting grain and cooking oil (if they appeared) people valued the same cash amount much more highly. Because it meant that they had choices. Maybe they would eat sparsely (more sparsely perhaps) and save to buy a goat. Something that can't be done with goods but can be with money. Agency, the ability to decide for oneself, was valued.

How it worked out in the US of A

The US Census has noted exactly the same thing. They know very well that people value food stamps at less than their face value. This is why the deals we sometimes hear about, of swapping food stamps for cash are always done at a discount to cash, not a premium.

The import of this is that we can increase the wealth (or income, as you prefer) of the poor by giving them cash instead of goods and services at the same cost to ourselves because they value that cash more than they do the goods and/or services. Or, of course, we can reduce a bit the amount this welfare costs us and still provide the same value to the poor by doling it out in cash.

So, a basic income definitely works in trials in India. We've good theoretical reason to believe that it would work in the US and UK. And that's where this all starts to turn to shit. Because we've actually done trials of this, in the US in the 1960s and 1970s. Recall that our crucial (from the right at least) contention is that the very high marginal tax and benefit withdrawal rates constitute a poverty trap. Thus, if we remove that trap we should see an increase in working hours offered to the market by those poor households. It's this that makes one part of the sums work: the contention that those marginal tax rates are so high as to be over the peak of the Laffer Curve. Reduce them and we'll actually, over time, grow the economy more than otherwise.

And our problem is that this isn't the way that it worked out. Labour hours offered declined. All of the other arguments still seem to stand. Much easier to administer, cash instead of goods is better, agency is achieved, we do empower the poor by enabling them to tell grossly exploitative employers to bugger off and so on. But that one contention, that it will grow the economy, seems not to be true.

At least, it wasn't true in 1970s America. Yet it is true in 2010s India. Perhaps whether it works in this manner or not depends upon how appallingly bad the system is before reform? This is something I could believe: Russia increased income tax collection by moving to a 13 per cent flat rate. But no, I do not think that that would increase collection of revenue in the UK or US simply because I know how incredibly bad the Russian tax system was before the reform.

So it's a bit of a mixed bag, this universal basic income. I'd like it to work; theoretically it should work. In some places it does work but in places rather like our own, it doesn't seem to in one crucial aspect.

I checked something on Wikipedia only to find that it was quoting me on the point. Right, never trusting that source again.