Net neutrality in the US: Look out! It's Neut-gate! Or is that Net-ghazi?

What are you hiding Obama?!!

Comment In what promises to be the latest version of an unreasonable and largely pointless pissing match between Congress and the White House, the House and Senate have sent document requests to find out just how much pressure the White House put on the FCC over net neutrality rules.

On Friday, chair of the House Oversight Committee, Jason Chaffetz sent a letter [PDF] to FCC chair Tom Wheeler asking for all communications between FCC staff and the White House, as well as logs of meetings between FCC and Obama administration staff.

That was followed by another letter [PDF] earlier today from the chair of the Senate's panel on governmental affairs, Ron Johnson, who again asked for all documents and communications between FCC staff and the White House.

The theory of course is that the White House and its evil tyrant occupier Barack Hussein Obama have got Something to Hide™, especially in light of the tremendous turnaround from Tom Wheeler as FCC chair following President Obama's public advocacy of him using Title II legislation.

Previously, Wheeler had devised a "hybrid plan" and, according to one extensive media report into the behind-the-scenes maneuverings, was preparing to push that plan extensively before he was blindsided by Obama. Now, Wheeler is poised to push stronger-than-expected rules at an FCC meeting on 26 February.

Wheeler has also refused to make the rules public before they are approved, ignoring requests from Congress and two of his own FCC Commissioners.

Both Congressional letters demand the release of information just days before that vote is due, and neither the FCC nor the White House are making any comment on the letters or their planned response. 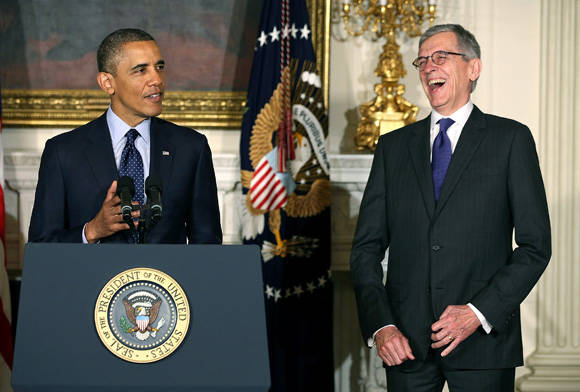 The FCC is supposed to be an independent regulatory body - something that both Obama and Wheeler repeatedly acknowledged in the past few months. But Wheeler is a close political ally to Obama, having been one of the first serious names to get involved in his election campaign in 2008, and owes his current position to the president.

It's not clear what Congress expects to uncover with its request, or even if it were able to do anything if it did discover that FCC staff were communicating extensively with White House staff (on that basis you could argue that FCC staff were colluding with the cable companies given the huge number of interactions and meetings the two share).

But fundamentally that doesn't matter, because net neutrality has already become a partisan issue. Cable companies have been stirring up their Republicans allies (beneficiaries) in recent months, arguing against overweening government regulation and trying to push through legislation that would bypass the FCC.

Plus of course, anything to do with President Obama is catnip to Congress. So, welcome to Neut-gate, prepare for Net-ghazi, because it's our internet and nothing will get in the way of Congress' search for the truth! ®