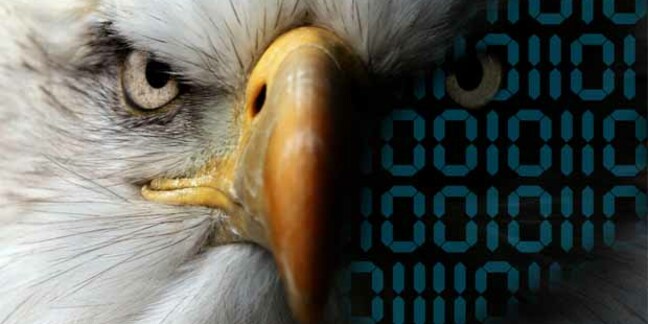 A California court has once again upheld the legality of the US National Security Agency's Bush-era mass telephone surveillance program, but has withheld its reasoning on grounds of national security.

In a ten-page ruling [PDF] on Tuesday, US District Judge Jeffrey White of the Northern District of California said that the government's arguments in favor of the legality of the program were "persuasive, and must remain classified."

The ruling is just the latest setback in the long-running case of Jewel v NSA, which was first filed by the Electronic Frontier Foundation in 2008 on behalf of AT&T customer Caroline Jewel. The latest filing also included a cross-motion from a second case, Shubert v Obama et al.

In both cases, the plaintiffs sought to have the NSA's wiretapping program declared illegal under the US Constitution's Fourth Amendment protection against unreasonable search and seizure.

In his latest ruling, however, Judge White found that neither plaintiff had established sufficient standing to sue under the Fourth Amendment. In other words, they hadn't presented enough evidence to prove that they had been directly harmed by the NSA's actions, and so had no grounds on which to sue.

More worrying, however, was Judge White's finding that the plaintiffs couldn't have proven their case under the Fourth Amendment, because to do so would have required the government to lift the lid on what it was actually doing.

"Further, having reviewed the Government Defendants' classified submissions, the Court finds that the Claim must be Dismissed," Judge White wrote, "because even if Plaintiffs could establish standing, a potential Fourth Amendment Claim would have to be dismissed on the basis that any possible defenses would require impermissible disclosure of state secret information."

Some of those state secrets may actually have already been disclosed. The original lawsuit in Jewel v NSA was filed long before NSA whistleblower Edward Snowden's leaked documents came to light, beginning in 2013, and many of his disclosures concerned the NSA's phone surveillance programs.

Nonetheless, to acknowledge any currently classified information in open court remains beyond Judge White's purview. But although he said he was "frustrated" at not being able to disclose his full legal reasoning publicly, the judge said in his ruling that he was confident that it was sound.

"Although partially not accessible to the Plaintiffs or the public, the record contains the full materials reviewed by the Court," Judge White wrote. "The Court is persuaded that its decision is correct both legally and factually and furthermore is required by the interests of national security."

The EFF has not said whether it plans to appeal the ruling. Past appeals in similar cases haven't gone well for the activist outfit, however. In 2012, the US Supreme Court declined to hear an appeal of a different case brought by the EFF against AT&T, effectively rendering the major US telcos immune from prosecution for complicity in the NSA's wiretapping programs. ®