Video Europe's first reusable spaceplane has had a successful flight, traveling 413km (256 miles) above the Earth before splashing down on the other side of the planet.

The delayed Intermediate eXperimental Vehicle (IXV) spaceplane lifted off from ESA's spaceport in French Guiana at 1340 GMT on Tuesday heading east atop a three-stage Vega rocket. It reached apogee over Europe and then began a rather tricky descent.

The 5m by 1.5m by 2.2m, two-ton aircraft uses a lifting body design, thrusters, and twin rudders at the rear to control the return trip. On descent the IXV hit a peak speed of 7.5km/s (16,000MPH), but the avionics and the heat-resistant shell held up.

The IXV came down on target 100 minutes after launch in the Pacific near to the Galapagos Islands and deployed a subsonic parachute to float down to the sea. Airbags on the side popped out as planned to keep the vessel afloat. 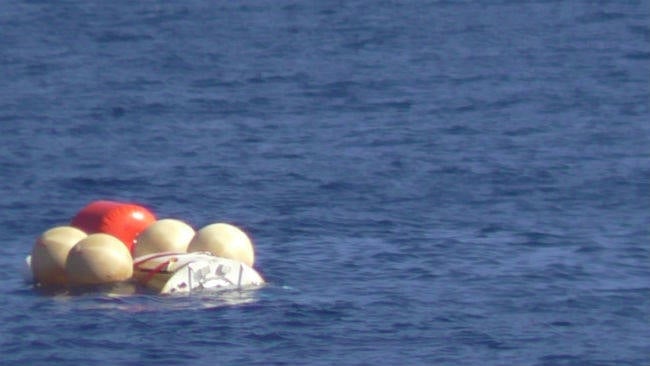 ESA's IXV spaceplane down and soggy

"The speedboats went to the site and stayed at a 500m stand-off distance for safety until we gave the go to approach further," ESA mission control reported.

"All floatation devices were deployed with the IXV swimming nicely. The ship is still performing recovery; we will close here at mission control. I see very many happy faces here!"

During its flight the IXV collected reams of data from over 300 sensors studding the spaceplane, and these are now going to be analyzed to build into future designs. The avionics package is key, but so too is the cost of refurbishment before reuse.

The IXV is ESA's belated move to get into the recyclable space vehicle game. Its Ariane rockets are still the most reliable way of getting cargo into orbit, but they are throwaway hardware, and IXV is the testbed for ESA's Future Launcher Preparatory Programme that will decide the future focus for ESA.

There's still a long way to go however. The US military has had its not-so super-secret X-37B spaceplane in orbit for years (literally) and SpaceX (which also had a splashdown in the Pacific on Tuesday) is taking the more revolutionary approach of reusing the delivery vehicle and the rocket that fired it.

But there's a long way to go for the IXV. The small spaceplane needs to be scaled up to carry useful cargo. And if it's going to make a controlled delivery, such as a rendezvous the the International Space Station, it'll need to deploy solar cells to charge the batteries it runs on.

Tuesday's test was also good news for ESA's Vega rocket system. The mid-range rocket performed flawlessly on its third flight and ESA is hoping it'll scoop up valuable business in the low-Earth orbit market, cutting launch costs to about $20m to 30m a pop.

The market for orbital delivery is hotting up at the moment, and even El Reg has skin in the game. Our Low Orbit Helium Assisted Navigator (LOHAN) spaceplane, an innovative mix of balloon and rocket technology, will be making its first flight this year, once the US government gives permission.

For commercial flights, the competition is hotting up and ESA wants to make sure it'll be in business in the decades to come. Reusability does seem to be the way forward for orbital delivery, if the costs to do so can be controlled. ®