FCC Commissioner Ajit Pai used a Tuesday press conference to slam net neutrality rules that are expected to be approved by the regulator later this month.

"I have studied the 332-page plan in detail, and it is worse than I had imagined," Pai told the room of reporters and tech policy analysts before giving six reasons why he won't support it.

Almost as soon as he started, Twitter came alive with accusations and rebuttals, facts and counter-facts as the partisan roadshow arrived at the FCC.

The most significant accusation levelled at the rules - which won't be made public until after they are approved - is that it allows the FCC to set broadband rates.

"The claim that President Obama’s plan to regulate the Internet does not include rate regulation is flat-out false," said Pai. "The plan clearly states that the FCC can regulate the rates that Internet service providers charge for broadband Internet access, for interconnection, for transit—in short, for the core aspects of Internet services."

This immediately became the centre of a heated back-and-forth with the FCC chair's legal advisor Gigi Sohn saying there isn't rate regulation and then being barracked by Pai's legal advisor Brendan Carr saying there is. Followed by net neutrality advocate Harold Feld pointing out that the FCC has not done price regulation in 20 years, even though technically it was be able to. And so on.

.@GigiBSohnFCC how can u say "no rate regulation" when the plan says FCC can determinate whether charged rates were unjust or unreasonable?

Then there was some back-and-forth between Feld and Wall Street Journal reporter Gautham Nagesh, who wrote an article about how the White House has worked on the FCC to changes its stance and in so doing sparked letters from Congress asking for interactions between the White House and FCC.

@haroldfeld @AjitPaiFCC To be fair, many people on your side privately admit that some form of price control for bb is an ultimate goal.

And so it continued, with Pai making aggressive criticisms, including that the FCC will micromanage the internet, the plan will open the floodgates to trial lawyers, and the rules will see billions of dollars in new taxes. Most of which were speculative at best and misleading at worst.

But the fireworks were just online. Moments after Pai finished his statement and asked for questions from the floor, two protestors rushed in and tried to unfurl a banner but were bundled out by security.

"Mr Pai, can't you see, 85 per cent of Republican voters want net neutrality," cried out the female protestor while her male counterpart was less polite, yelling "Represent the people!" before being manhandled out the door. 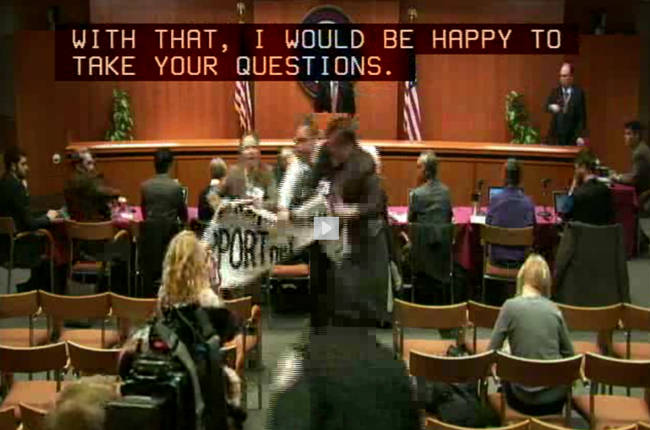 Where Pai has clearly sensed that the public is behind him however is in the fact that FCC chair Wheeler has refused to publish the rules. Asked why he doesn't release it himself, Pai said that he "suffers from the malady that I take the FCC's rules and procedures seriously".

"I would love to provide it to you," Pai said, adding that the American people should have an "open, transparent debate" about the text before it becomes law and that the current situation was "absurd". You can watch the whole thing online (psst! the protestors come in at 8m55s).

As luck would have it, the Tech Policy Institute published a paper on this very topic at the same time called "Administrative Procedures, Bureaucracy, and Transparency: Why Does the FCC Vote on Secret Texts?" [PDF]

The paper doesn't dig into the fact that FCC keeps its text secret before it approves it but does look at the even more disturbing fact that approved text is often changed after it has been voted on.

Delays between a publication have become the norm, the report's author Scott Wallsten found, with longer delays comes greater changes. "More controversial orders yield more dissent and longer delays," Wallsten notes, "implying either that commissioners engage in substantive negotiating following a vote or that the commission pays extra attention to the details of an order the more likely the commissioners believe it will be challenged in court."

So if it takes a while for the new net neutrality rules to be published after their approval on 26 February, then Commissioner Pai may be even more incensed when they finally appear. ®