Evolve: A shoot-em-up full of scary monsters and super creeps

All kinds of deadly flora and fauna populate its dense forests, and that's before you so much as consider the playable monster lurking within. Wandering through its expanses as a hunter is not only dangerous, but an often haunting experience. Unknown horrors chitter in the undergrowth, every step might land you in the maw of a deadly critter and out there, somewhere, is the monster itself. 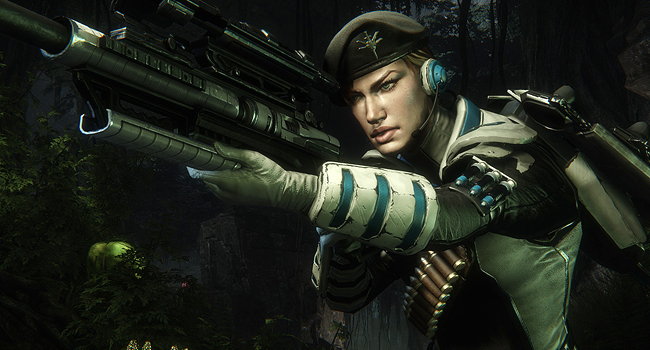 At least the medic class foregoes the whiskers

Conversely, playing the role of the monster is not as lonely than you might imagine. Suddenly those lesser creatures are food rather than a threat, meaning you spend your time gorging on them in order to evolve to the third tier of your growth cycle. 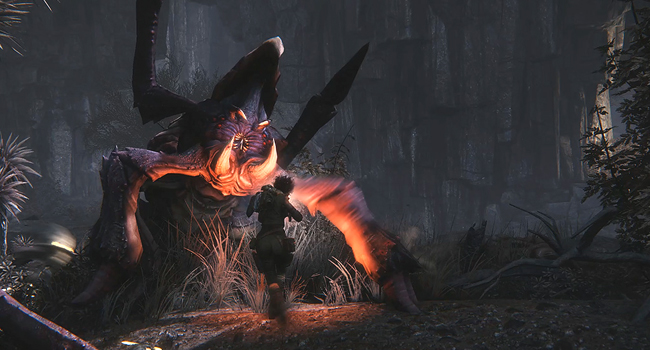 Adding to Evolve’s replayability is a deceptively deep roster of human characters. For every class type there are multiple soldiers; each with unique equipment, strengths and weaknesses. The key to success is selecting four with compatible equipment and the right mixture of optional buffs. But then of course there are three monsters – Goliath, Wraith and Kraken – to contend with, each requiring different tactics to subdue.

There are actually more mission types than the regulation Hunt type too. Variations include a race against the clock to destroy nesting sites (Nest) and a similarly timed battle to rescue colonists (Rescue). 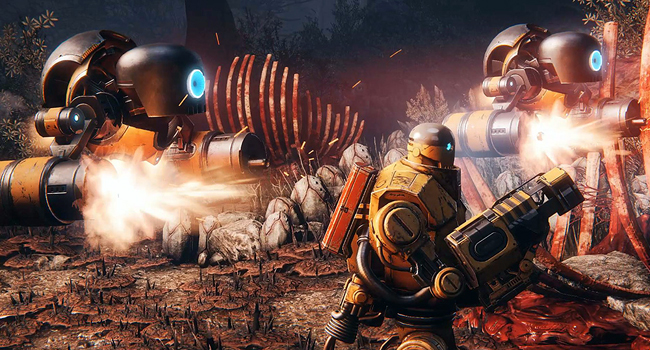 Where would you be without the Bucket support class?

Perhaps the most interesting of all is Evacuation, a mode that combines all gameplay types across five linked missions. The ultimate goal being to save (or kill) Shear’s human colonists. Win a match and your team will gain advantages in the next round, lose and you'll be further up against it.

Turtle Rock's other team-based shooter, Left 4 Dead, never had stages with that kind of knock-on effect. But, for my money, it did have by far the better narrative. L4D might only have had a handful of scenarios in which to blast through, but the way its chapters led smoothly into each other provided momentum and, ultimately, a sense of tangible triumph. 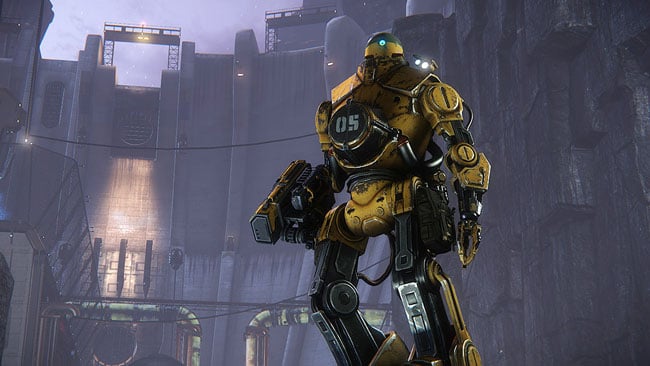 Evolve’s campaign, even it its best in Evacuation mode, has more in common with the “almost there, but not quite” story of TitanFall. It gives us brief flirtatious glances of what might have been, but its encounters don't have same weight of importance attached to them as Left 4 Dead.

In its current state, Evolve proves to be a solid and interesting shooter. It fulfils its promise of delivering a uniquely asymmetrical multiplayer experience, has enough content to unlock on disc to keep me coming back (for now) and, shocker, it actually works at launch.

In the longer term it's harder to judge. How long its limited number of modes will continue to captivate will vary from player-to-player. And, while DLC is on the way, it looks to be pricey. If you’re on the fence, I'd say give it the benefit of the doubt. Perhaps just wait a few weeks until the game's price falls before jumping in. ®