TITANIC: Nuclear SUBMARINE cruising 'Sea of KRAKENS' may be FOUND ON icy MOON

Splashdown in hydrocarb ocean suggested for 2040

NASA boffins have come up with a design for a submarine they reckon could one day be used to explore the liquefied hydrocarbon seas of Saturn's mysterious freezing moon, Titan - the only bodies of surface liquid confirmed to exist off Earth.

The submarine – to be revealed at the 46th Lunar and Planetary Science Conference in March but already described in this document (PDF) – is proposed as a way to explore Kraken Mare, a body of liquid spotted by the Cassini probe in 2007 and since identified as the largest sea or lake in Titan's north.

Small waves have been observed on the lake, which is thought to be up to 160 metres deep.

All that liquid creates a problem for any submarine, as the authors of the design note “the direct transmission of worthwhile amounts of data over a billion miles to Earth requires a large antenna”, because the mission design precludes an orbiter to relay data home. The suggested remedy is a dorsal fin concealing an antenna, a compromise inasmuch as the extra structure will create a bit of drag and make placement of buoyancy control tanks tricky.

Transmissions will take place when the sub surfaces. While floating, it's thought the vessel will also put a mast-mounted camera to work. When submerged, side-scan sonar will be used to map the sea's floor and a “benthic sampler” would attempt to scoop up sediments for analysis.

Another design consideration is the density of Titan's seas, which are thought to be made of either ethane or methane, or perhaps to have regions of different concentrations of both. Until we know which, designers are assuming they'll need to build the sub for the heavier methane.

Temperature's another worry, because the terrestrial technique of using tanks full of air to control buoyancy won't work on Titan because it's so cold there Nitrogen could condense into a liquid. All sorts of exotic arrangements for transfer of liquids and gases to control buoyancy are therefore discussed. 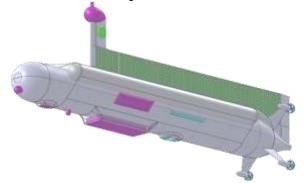 Then there's the question of how to land a sub on Titan. The document points out that submarines aren't very aerodynamic, which would make for a tricky journey through the moon's atmosphere and a trickier landing. The proposed solution is to pack the submarine into a vehicle like the X-37 autonomous space plane which would make a water landing, open its cargo bay and then sink, leaving the submarine to go about its business.

The sub would be powered by a “radioisotope Stirling generator power source” sufficient to enable a 90-day, 2000km journey.

The document is all blue-sky thinking done under the auspices of the NASA Institute for Advanced Concepts. Little wonder then that the authors say “Even with its planetary application aside, this exercise has forced us to look at submarine vehicle design drivers in a whole new way.”

As you do, when considering how to move around in an ocean of liquid farts on a far-off moon orbiting a gas giant. ®