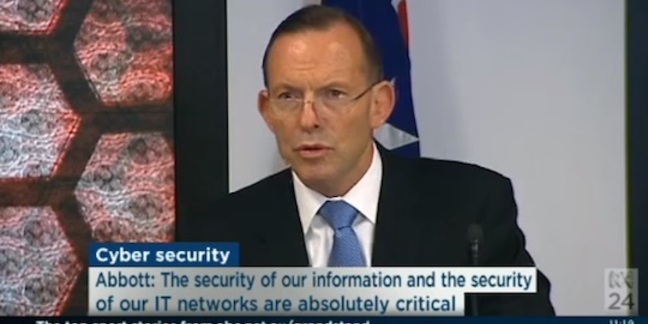 One day after Australia's prime minister Tony Abbott promised a more hard-line approach to national security, the government has delayed a cyber-security review.

Over the weekend, the PM's YouTube channel carried a statement (video at the end of this story) in which he complained that Australia's treatment of immigrants-turned-radicals was too weak. In that video, he reiterated the government's intention to pass the data retention laws as soon as possible.

When announced by the PM's office in November 2014, the review was slated to be completed in May.

However, Fairfax Media outlets are now reporting that the review's report won't be delivered until November 2015.

He added that some of the panel's work will be delivered in June, which has given the Department of Prime Minister and Cabinet the chance to say the review will report to the government in the middle of the year.

The statement launching the review says it will:

Well ahead of the cyber-security review, ASIO director general Duncan Lewis has briefed News Limited on his intention to “declare cyber war” (as the newspaper put it) on extremist material on the Internet.

He called online radicalisation in “lounge rooms” as great a threat as radicals fighting overseas and returning to Australia, and re-emphasised ASIO's belief in the need for new data retention laws to “prevent agencies 'going dark' due to a lack of information”.

The briefing suggested Australia could adopt the British model of ordering take-downs of “Islamic state” websites, and developing “counter narratives” to terrorist material.

The delay to the cyber-security review comes as the first signs emerge of political division over the government's proposed data retention regime.

Opposition leader Bill Shorten has sent the PM a letter complaining that he has “politicised” the issue.

Shorten's letter (published by Fairfax here) calls for information on the potential costs of the regime, insists that press freedoms be protected in the bill, and seeks the release of a the finalised data set.

However (unsurprisingly since when in government the ALP got the data-retention-ball rolling), the opposition leader also restated his support for the “expeditious consideration of this Bill by the Parliament”. ®