Special Report The BBC Trust has supported its programme makers in their use of old and debunked scientific conjectures to produce a "Hollywood style" environmental disaster film.

In a formal decision, the operationally independent governing body of the broadcaster rejected a complaint made about the BBC Two TV "documentary", Could We Survive A Mega Tsunami?.

The film dramatised the effects of a giant ocean wave ("starting at one kilometre high"), far greater than the tsunamis created by earthquakes, and illustrated by (in the BBC's own words) "Hollywood-style graphics". The film showed havoc being unleashed upon European and North American seaboards.

The complainant argued that far from being new, the Mega Tsunami theory's "science" is actually very old, having first been aired by the BBC 15 years ago. The conjecture has been dismissed by geophysicists as "nonsense" and "fiction", and has been repeatedly debunked in the peer-reviewed scientific literature.

In broadcasting it as it did, complainant Mark Pinder argued the BBC was presenting a highly misleading picture.

The BBC's own guidelines on reconstructions state that they "should normally be based on a substantial and verifiable body of evidence," and it "is usually unacceptable to use production techniques that materially mislead the audience about the reality of the narrative or events".

"I felt that my intelligence was being insulted to the point where I thought that I’d possibly switched over to BBC3 by accident," Pinder argued. "The imagery and tone was so over the top, that I half expected Godzilla to make a guest appearance, or at very least Al Gore."

The BBC Trust's Editorial Standards unit interpreted the complaint in an unusual way. Pinder, the Trust decided, was not challenging the presentation of the weight of evidence, but challenging the authority of the people making the argument.

It thus rejected the complaint on credentialist grounds: the academic promoting the Mega Tsunami theory "is a recognised expert in the field". The film makers had included sufficient hedging material to pass a narrow reading of the accuracy tests, even though it had failed to reflect the geophysical academic consensus.

So confident of its Mega Tsunami film is the BBC, that it was broadcast it for a third time on 29 January. You can see it on iPlayer here.

The Hollywood Appeal of the Mega Tsunami

To generate the energy required to create an exceptionally large and destructive wave, the landslide would not only need to be massive, it would need to be one single "event", rather than a succession of subsidences, which would of course create smaller waves.

Proponents identified one area as a candidate: the Canary Islands, specifically a volcanic ridge on Isla de La Palma called Cumbre Vieja. The problem is, scientists strongly dispute this.

"The level of support for this hypothesis is, shall we say, somewhat lacking within the scientific community," according to Professor Dave Petley, Pro-Vice Chancellor at the University of East Anglia, and the co-author of an undergrad textbook on environmental risks, now in its fifth edition, writing on the American Geophysical Union's blog.

"This scare should be consigned to the garbage can once and for all," he added. 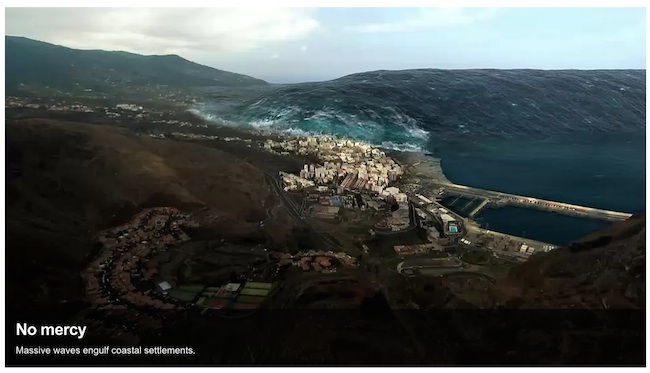 The Tsunami Society issued a strongly worded statement on the hypothesis written by five scholars in 2003, and has updated the page ever since.

"We would like to halt the scaremongering from these unfounded reports. We wish to provide the media with factual information so that the public can be properly informed about actual hazards of tsunamis and their mitigation," the Society wrote.

"No such event, a mega tsunami, has occurred in either the Atlantic or Pacific oceans in recorded history. NONE," the Society explained. Volcanic collapses are so rare, they happen only every few million years. And the Cumbre Vieja volcano will not cause a massive and sudden rock displacement. Waves caused by eruptions simply don't travel like quake-generated waves for thousands of miles, their impact is intense and local.

Others have stepped forward to debunk the theory too.

The former Director of the UNESCO's International Tsunami Information Center George Pararas-Carayannis pointed out the theory was based on "the incorrect assumption that the underwater flanks of the Cumbre Vieja and Kilauea volcanoes are extremely unstable and that massive failures can occur in the near future".

However, the Mega Tsunamists can't account for a mechanism needed to prompt such a dramatic collapse. Pararas-Carayannis also dispelled the idea it could trigger a 30m wave reaching New York, or a 50m wave washing over Florida and the Carribean, which the BBC film makers were keen to illustrate.

The theory has also been shot down by the University of Delft. Using a laboratory fluid mechanics experiment, Joana van Nieuwkoop found that:

"Only when the volcano becomes a kilometre taller than its current height (a situation that will not arise until some ten thousand years from now) will there be any risk of part of the cliff subsiding into the sea.

"And even then, it will not suddenly crash into the water as an enormous piece of rock, but in the form of layers of rock face that gradually slide into the sea."

In other words, it's the wrong kind of rock, and far too small.

Here in the UK, marine geologists at the University of Southampton confirmed that the mega tsunami hypothesis was improbable and overblown.

And in 2013, after the BBC's film debut, but before the two re-broadcasts, National Oceanography Centre researchers cast further doubt on the mega-tsunami catastrophists' claims.

With all this behind us, now let's turn to how the theory grew legs, and why the BBC chose to ignore the evidence contradicting it.

Next page: The Catastrophe Men
Page: