The new release manager for version 4.6 of the open source Xen Hypervisor has proposed changes to the project's development process that he hopes will speed things up.

Citrix employee Wei Liu, who has scored the gig of ushering the next version into the world, has explained the new plan in a post, presentation and mail in which he outlines his intentions for this release.

The reason for the changes is that the last version of Xen required eleven months of work, two more than Xen aims for between releases. That's obviously not helpful or desirable, so Liu wants to speed things up and nail this release.

To do so, he suggests a feature freeze on July 10th, ahead of an October 9th launch. That freeze will be rather longer than was the case for work on Xen 4.5. 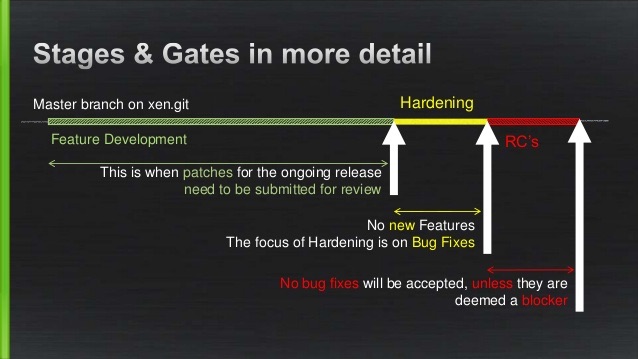 How things worked on Xen 4.5

Liu reckons a shorter “soft” freeze will do the trick as the long freeze for 4.5 “made upstreaming new features harder for contributors -- they need to rush to get their features at least posted in development window, then argue for whether it's OK to get in after soft freeze; Otherwise they risk waiting several more months.” 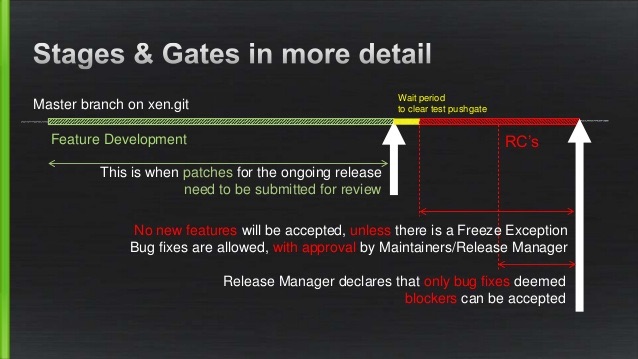 The new-look development process for Xen 4.6

The new arrangements above, Lui feels, mean “we have shorter time in freeze and lead to possible less harden code. But I don't really see that as a big issue, given that we a) we still set aside 3 months for it, b) we only need to harden existing code.”

He also feels it will mean “no more arguing whether a feature should go in after freeze.”

In other words, once the project's Fro-Xen, it's time to Let It Go if you want any new features. At least until the sequel, which in Xen's case will emerge in 2016. ®