Five Brits on the shortlist to wear red shirts

Pics The final 100 wannabe Mars One colonists have been announced.

The organizer of the project has received 202,586 applications from Earthlings longing for a one-way trip to the fourth rock from the Sun – and claims it will fire the first four settlers to Mars in 2024. It will fund the whole thing through sponsorship and a reality TV series – made by Endemol, the same people behind Big Brother, covering the preparations and mission on Mars.

"The large cut in candidates is an important step towards finding out who has the right stuff to go to Mars," said Bas Lansdorp, co-founder and CEO of Mars One. "These aspiring martians provide the world with a glimpse into who the modern day explorers will be."

The 50 men and 50 women are aged between 19 and 60, and include 39 representatives from the Americas, 31 Europeans, 16 Asians, and seven from each of Africa and Oceania. These will be whittled down to 24 final picks in a promised show that is "coming to screen soon."

"Being one of the best individual candidates does not automatically make you the greatest team player, so I look forward to seeing how the candidates progress and work together in the upcoming challenges," said Mars One's chief medical officer Dr Norbert Kraft.

Some of the potential astronaut picks seem to be based on their televisual appeal rather than usefulness as likely colonists. 60-year old Reginald from Pakistan describes himself as a "Jack of all trades," while 19-year old Shradha likes reading science fiction and romance books and "sensitive to the feelings of the people I love."

There are five hopefuls from the British Isles in the final 100 candidates – four space scientists and Clare, a systems integration manager for Virgin Media, who might have more troubleshooting smarts than the rest of them put together.

We're on the road to nowhere

The Mars One plan calls for the launch of an unmanned Mars probe in 2018, and a communications satellite. Mars One has signed up Lockheed Martin to provide the space and landing hardware and Surrey Satellite Technology is dealing with comms. 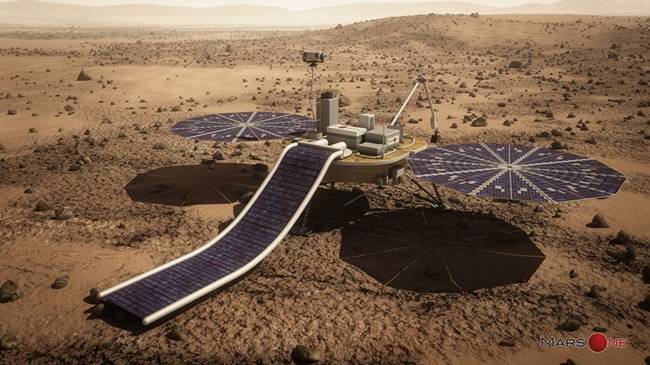 In 2020, it's planned, another rover will be launched to explore the chosen landing site on Mars, along with another communications satellite, and two years later five 10-sq-meter modules (two living units, two for life support and a cargo pod) will arrive along with a robot to set them up.

The manned mission will leave Earth's orbit in 2024, it's planned, and arrive at the Red Planet nine months later. The settlers will then inflate balloons to give themselves another 200 sq metres of living and cultivation space.

Every two years after that another four astronauts will arrive, along with fresh cargo, and by 2033 the Mars One team hopes to have 20 settlers on this first colony. They will be covered by TV cameras the whole time and the resultant footage will be sold as the first interplanetary reality TV show to fund the ongoing mission.

Mars One calls its plans visionary, but most of the scientific and space community are less polite. The idea has been criticized for being underfunded, overambitious, and a suicide mission according to one study.

Scientists at MIT gamed out [PDF] the Mars One plans and estimated that the project relied on unproven water and gas extraction techniques and woefully underestimated the amount of equipment needed to do the job. They estimated Mars One would need 15 fully-laden launches of SpaceX's Falcon Heavy lifter, which hasn't flown at all yet, to get the required equipment to Mars, at a cost of $4.5bn, rather than the six planned launches.

Assuming – and it's a big assumption – that the manned crew even makes it through nine months of interplanetary travel without succumbing to radiation sickness, atmospheric poisoning, or strangling each other, they won't last that long on Mars, the MIT study claims.

"Day 66 in the Mars One house, and the contestants are starting to turn blue."

Growing crops within the proposed habitat could generate dangerously high levels of oxygen, making the entire colony highly flammable. The only solution is to add nitrogen to the atmosphere, but according to MIT's projections, supplies would last 66 days and after that the air pressure would have to be reduced until the settlers suffocate, or the amount of oxygen would incinerate the inhabitants at the slightest spark.

Mars One disputes the MIT study, while offering no detailed plans of its own to explain the science behind its project. To have even a chance of success Mars One will need systems to extract minerals and gasses from the Martian atmosphere and there's no publicly known technology available that's suitable.

All that relies on the venture obtaining enough funding to get off the ground in the first place, and that looks thin on the ground. So far Mars One has raised just $759,816 in sponsorship, crowdfunding, and merchandise sales, which isn’t enough to launch a microsatellite, let alone a Mars colony. ®