Violin Memory is back on a level playing field with all other all-flash array suppliers. It's launching two new flash array systems with integrated data services through its Concerto operating system and Symphony management software upgrades. It's also adding 40Gbit Ethernet connectivity.

The pitch is that Violin now has the data services portfolio and the AFA costs, in total-cost-of-ownership terms, for it to be feasible to store all your primary data – tiers 0, 1 and 2 – on its flash with everything else archived.

For individual customers that's going to depend on workloads and bulk data storage needs; as ever, your mileage may vary.

The first new box, the 7300 Flash Storage Platform (FSP), is a 3U unit which supports from 11 to 70TB of raw flash, with an effective maximum capacity, after inline dedupe and compression, of 221TB.

Effective capacity is calculated thus: (raw capacity – spares – parity) x dedupe rate = effective capacity. The dedupe ratio is 6:1. Violin says some workloads like database will get less, some like VDI will get more. It doesn't include any thin provisioning in the data reduction calculation.

Think of the 7300 as a converged and integrated Concerto data services head and 6000 array.

The 7700 FSP is physically larger, at 24U, consisting of a head unit and 6 storage shelves connected across a Fibre Channel backplane. All capacity is delivered from 7300E, 7300, 6200 or 6100 shelves; all MLC flash systems. The high-performance SLC flash-using 6600 array could be used as a 7700 storage shelf as well. At least one shelf is needed for a single site, two for a stretch cluster.

Its supported flash storage ranges from 11 to 422TB of raw flash, up to slightly more than 1.3PB effective capacity, in a single namespace, at the high point.

Connectivity options for the 7300/7700 include 16Gbit/s Fibre Channel. 10GbitE iSCSI with 40Gbit/E iSCSI in the first half of this year.

Both the 7300 and the 7700 have 4th generation architecture with enhanced VIMMs (flash die-carrying Violin Intelligent Memory Modules). Compared to the previous VIMM technology Violin says customers will see:

Violin says that SSD-based AFAS have non-concurrent writes, meaning reads have to wait until writes complete.

All of this should add up to better endurance and reliability as well as faster performance.

The basic 6000 series flash arrays now use 19nm flash dies from Toshiba which provides headroom for capacity increases in the future. 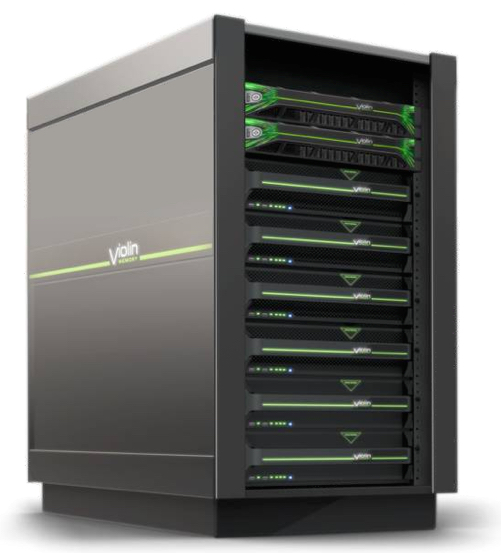 COS 7 provides integrated continuous data protection, Stretch Metro Cluster (7700) and LUN mirroring. Data reduction can be turned on or off as workloads require; it is not automatically running. Violin is also providing:

With this new software there is no longer a need to have separate Concerto heads, with separate GUIs, providing data services. Now there us rewritten software and a single symphony GUI.

Violin reckons its flash cost and price/performance with these new systems is pretty darn good and showed us a table to prove its claim:

Let's dig into this a little. We made a graph of the $/raw GB numbers to bring out the magnitude of the differences. The annotations are (1) publicly-available info, (2) discounted GSA pricing and not list, and (3) assumes 40 IOs/transaction. 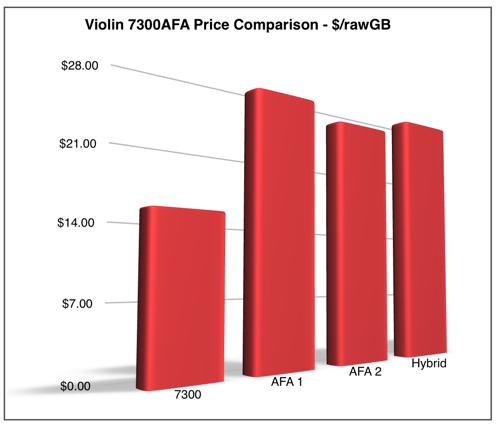 As is usual with these charts and tables, the competing suppliers are not named. We wondered if we could find out who they were by looking at various AFA and hybrid array suppliers' websites.

We are now of the opinion that:

If we're right so far, then the comparisons are based on different kinds of IOPS and are therefore pretty crude. Violin claims the 7300 costs up to 85 per cent less $/transaction than other all-flash arrays. If (and when) you do your own comparisons, your numbers may well differ.

Violin's pay-as-you-grow pricing scheme applies to these new systems, by the way.

Anything a traditional SAN can do, these 7300/7700 systems can do too, but faster. Violin says they're suitable for physical or virtualised transaction processing/database applications such as ERP, CRM, GL, OLTP and OLAP, also VDI. They can be used for private and hybrid cloud workloads and also Big Data analysis of structured and unstructured data.

Violin has marketing ground to claw back against Pure and Solidfire, and also IBM (FlashSystem) and EMC (XtremIO) because it lost its way around the time of the IPO in September 2013. We could roughly assume it's got 18 months of development and market attack to make up.

The 7300 is shipping now and went Generally Available (GA) a couple of weeks go - stealthy move - with Violin having orders already. The 7700 will GA by the week of 9 March. The 6000-series and 7100/7200 all-flash arrays, as well as the Windows Flash Array remain in production. ®