Video Three NASA cameras have picked up the fiery entrance and explosive exit of a 500lb (226kg) chunk of space rock in the skies over Pennsylvania in the wee small hours of Tuesday.

The meteor was spotted at 0450 local time (0950 UTC) sixty miles above Beaver Falls. It was filmed by three video cameras that are part of NASA's All-sky Fireball Network, which watches from 15 locations in the US for just this sort of natural fireworks.

"The fireball moved almost due east at a speed of 45,000 miles per hour," said NASA Meteor Watch in a statement.

The two-foot-wide rock came down on a steepish trajectory, but was too small to hit Earth – that generally takes something the size of an SUV made of dense material. Hurtling through Earth's relatively thick atmosphere was too much for this rock, ultimately causing it to explode.

"It flared brighter than the Full Moon before the cameras lost track of it at an altitude of 13 miles above the town of Kittanning; there may be fragments scattered on the ground east of that location," NASA reported. 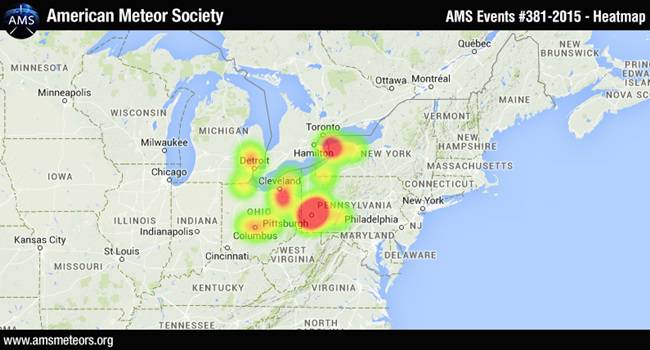 A heat map from the meteor's explosion

Technically speaking the meteor, which NASA is calling 20150217_meteoroid in this animation, didn't hit Earth so much as we hit it. The rock was on a wide orbit around the Sun when our paths crossed as Earth came at it from behind.

"This celestial visitor had an orbit that took it out to the main asteroid belt between Mars and Jupiter - it came a mighty long way to a fiery end in the predawn Pennsylvania sky," NASA concluded.

Spotting meteors in the night sky

In the aftermath of the Chelyabinsk meteorite blast – which was unexpected and injured about 1,500 people in Russia – NASA looked again at data collected from telescopes to see how many meteors were being missed by amateur and professional skywatchers.

The answer is: a lot. The American agency found that detonations in Earth's atmosphere, caused by incoming cosmic rock, are more frequent and more explosive than first thought.

Subsequent research showed that between 2000 and 2013 Earth was hit by two asteroids a year that exploded with a force of more than one kiloton, with the biggest bang a 600 kiloton airburst. None of these meteors had been spotted by telescopes.

In the meantime, there's nothing large enough that we can see in space that would cause humanity serious problems, although the amount of resources devoted to the task is tiny. But Earth's pockmarks show that eventually one will come.

As Neil deGrasse Tyson puts it, "asteroids are nature's way of asking 'How's that space program coming along?'" ®