Attack of the Jean Wearers

Transformation began with high hopes. Many arcane and specialised government sites would be swept away, replaced by clear, easy to use versions that encouraged more people to use them. Brilliant design would help bridge the “digital divide”, reaching the 16 million British refuseniks who can’t or don’t want to use the internet, and perhaps even change the relationship between the state and the individual.

"The designers rave about its radical focus on 'the user’ rather than the needs of Whitehall,” as a Times political correspondent explained last year.

"We’re flexible and we optimise for meeting user need and for delivery,” wrote GDS' Ben Terrett, explaining the GDS design team's philosophy. He continued: "We don’t make wireframes or photoshop mockups," going on, perhaps inevitably, to proclaim: “We are Agile”.

Despite all its much-vaunted focus on users and usability, the transition is now widely acknowledged to have been a disaster. GDS didn’t seem to know who the users of government services actually are. Specifically, the "jean-wearing Post It Note wranglers” at GDS (as some government IT types see them) didn’t realise that visa applications come not just from tourists, but from universities and business applicants too. Businesses typically use specialist agencies to accelerate the bureaucratic process and these were scuppered by the transition.

The new GOV.UK Visa and Immigration website sent users in circles, making simple processes difficult or impossible. The Home Office’s Chief Operating Officer warned GDS that it had to put its media team on crisis alert, with Mike Parsons, the COO, writing to GDS' Kathy Settle, a “director for Digital Policy and Departmental Engagement” at the Cabinet Office. Entertainers and sports stars were unable to enter the UK.

Complaint: Just one of many that winged its way to GOV.UK, in this instance the Home Office

The site has been designed for the needs of the ‘sole applicant’, without enough thought to the needs of the ‘corporate applicant’. Home Office Press Office are advising we ought to consider alerting Ministers in case stakeholders contact media / Ministers direct – we will probably do so early next week, as a precaution. 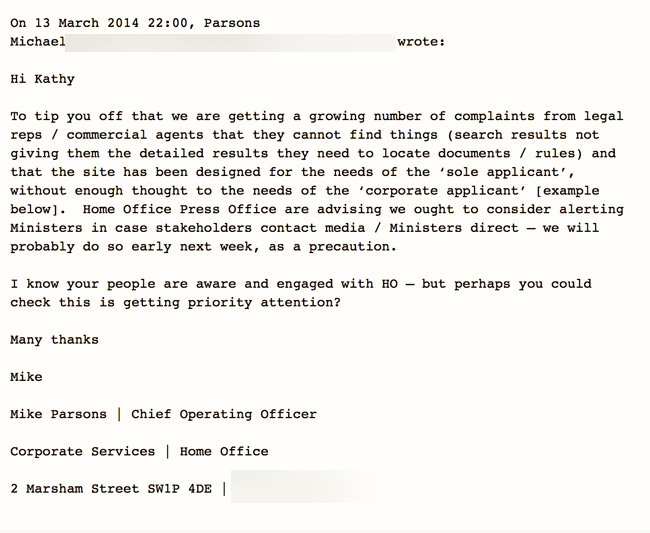 Jeans or no jeans, knowing who uses a system and why is a basic of requirements analysis. Subsequently GDS built a high-tech “user experience” lab complete with HD cameras, two-way mirrors and high quality audio equipment. At one point it was gathering 7TB of video feedback a month, according to a GDS blog post. The Economist enthused: "The lab should help to make public services more human — and humane.”

But no amount of technology helps when the research justifying its use is inept.

In April 2014, GDS held a post mortem on why the UK Visas and Immigration (UKVI) transition to Gov.UK had gone so badly. An external contractor was invited to interview over a dozen key staff. The results of the report were not shared widely “due to sensitivity”.

Next page: 'Arrgh! The switchboards are MELLLTING!'
Page: