How NOT to do it

“This would be a good case study on what not to do in the future,” one GDS manager had advised after the Home Office's awful Transition. But the Cabinet Office ignored the warning signals – and signs of staff burnout – and GDS ploughed on with the transition process.

In December, GDS touted its “big bang” as "over 300 Government sites” shifted to the new portal. Transition had become a vast bureaucratic exercise in Whitehall. It also created an opportunity for the Cabinet Office to expand its reach into new areas. GDS boasted of training over 1,000 content editors: GDS has also created "mini-GDS" centres in the regions. Spending on a lavish, high-tech “UX Lab” proceeded. 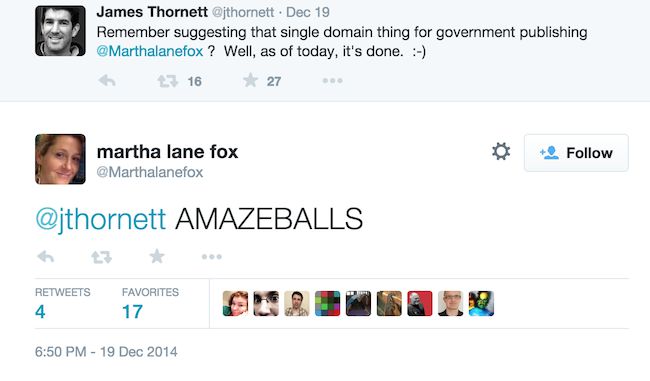 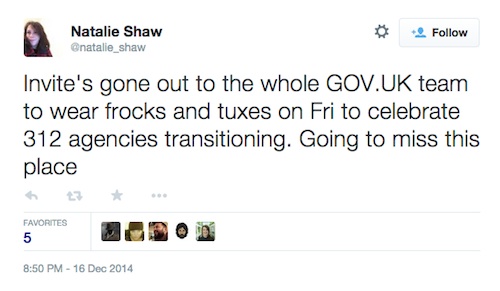 GDS staff celebrated the disastrous transition in December by dressing up. Natalie Shaw has since moved on from GOV.UK

Yet GDS' users didn’t see a great success. BBC Newsnight’s Chris Cook didn't buy into the digital buzzwords, and highlighted the flaws in a devastating analysis.

Huge amounts of actual information had been destroyed, while many of the new pages consisted of fluff and filler. Cook criticised a “silly one-size-fits-all design,” noting crucially that GOV.UK "regularised the irrelevant and allows variation in the essential.”

Functionality had also been lost: "There are also really simple things it can't do that (some) older government sites can.” He concluded the GOV.UK transition came “at a massive cost to users”.

The criticism stung, as GDS staff knew it was true. Managers forbade staff from Tweeting their indignation back at Cook – and the usually chatty Whitehall office went social media silent.

“GOV.UK is a huge step backwards in terms of good content that was easy to read & understand”, "an insult to intelligence, misleading, incomplete and, I think I can say without fear of contradiction from my respected peers, not something that can be recommended as a good source of content to my clients should I wish them to think I was doing a good job,” wrote one unfortunate user.

Cook’s observation was astute. The more specialist the need, the worse GDS had failed the users, who were asking, "where has that useful information gone?"

Thanks to GDS, doing business in or with UK plc had just become more expensive and more difficult. Yet insiders say it could have been worse: HMRC's Transition provides some useful lessons, as management at the Revenue wrestled some degree of control away from GDS' “Shoreditch types".

Insiders say the HMRC's Transition would have been much worse if that hadn't happened. Even today, if you want to file a tax return you don't do it on GOV.UK – you do it on the old website, though parts of that have cosmetic GOV.UK headers on them. 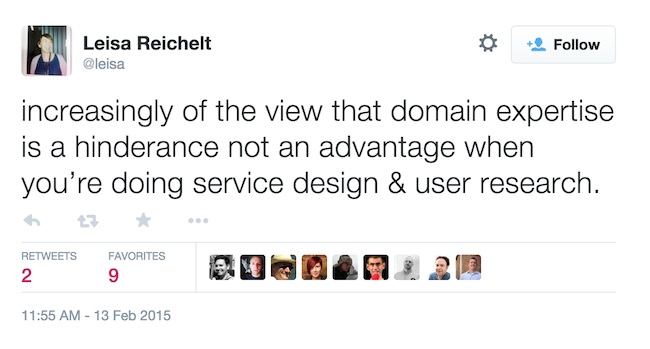 'The less we know, the better job we do' ... This recent Tweet from GDS 'Head of User Research' suggests the lessons of the botched GOV.UK transitions would never be learned

Perhaps that wasn't the wisest time for GDS to introduce a new gimmick: gov.uk/random – the URL takes you to a random page on the portal. Perhaps GOV.UK was “random" enough already.

The warning signs had actually been there well before the botched Visas and Immigration shift. A former GDS team member feared as much in 2012. The following year three software professors and one business professor studied the unit and found a "lack of demonstration of complex systems thinking” and “over-simplification of the cultural change required for success” among other concerns.

GDS had boasted that its new services and the new portal would create £1.7bn savings on services that cost £6bn to £9bn to run. That’s predicated on being able to lay off civil servants, as users could self-service. The National Audit Office was sceptical – "the evidence for savings is hard to follow”, it told the Cabinet Office in 2013 – and twice asked GDS to tone down its claims.

But it's worse than that.

"Nobody talks about savings any more,” says one source familiar with the transition process, who added: "If the site doesn't meet user needs because it was rushed out, and it doesn't save money because they've not actually switched off the [old] sites, what is it for?”

With an election looming, the Cabinet Office might just have created an excellent stick with which to beat the Coalition and its trendy “digital revolution”. ®