Arguably more important still to Photoshop’s emerging dominance throughout the 1990s was its Plug-ins. Right from version 1.0, Tom and John Knoll had devised a number of peculiar image manipulation effects they called “filters”.

To call them a mixed bag is an understatement: alongside useful things such as Gaussian Blur and Sharpen were dreadful functions for ruining your images, such as Twirl, Wave, Ripple, Lens Flare and the utterly useless Find Edges.

Adobe hated them and wanted them taken out. The Knolls were fond of them and managed to keep them hidden from the core code by building a plug-in architecture so that the filters could be added and removed as individual Plug-in files sitting in a Plug-ins sub-folder.

The brothers were subsequently proved right. That is, their dreadful Plug-ins remained dreadful, but the Plug-in architecture unexpectedly produced a vast third-party market for Plug-in providers. The late 1990s and early noughties turned Plug-in designers such as Kai Krause into industry celebrities with the kind of rock-star status only otherwise seen in the IT field in game development. 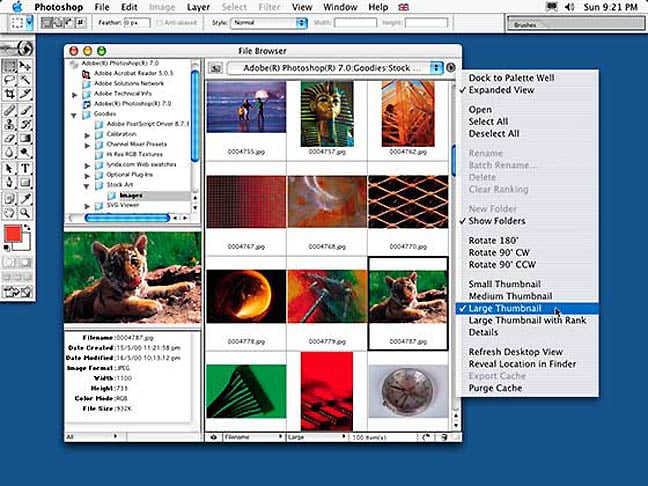 The File Browser from version 7.0 was later extracted and eventually became Adobe Bridge

At this stage, Photoshop had no one left to compete with: it was an automatic purchase and an inevitable upgrade. So Adobe took the next corporate step, leveraging Photoshop ownership to lock in casual users of its other application software. Creative Suite was born in 2003 with the implicit message: you can buy Photoshop on its own for £500, but for £700 you can have everything: InDesign, Illustrator, Acrobat – the lot.

Given that everyone in print, online and even film and animation production would purchase Photoshop without question, the offer of getting the whole Adobe design shebang for a couple of hundred smackers extra was compelling to say the least. In a curious exercise in marketing dominoes, then, it could be said that the once-universal page layout package of the 1980s and 1990s, QuarkXPress, wasn’t killed off by its direct competitor InDesign, but by Photoshop. 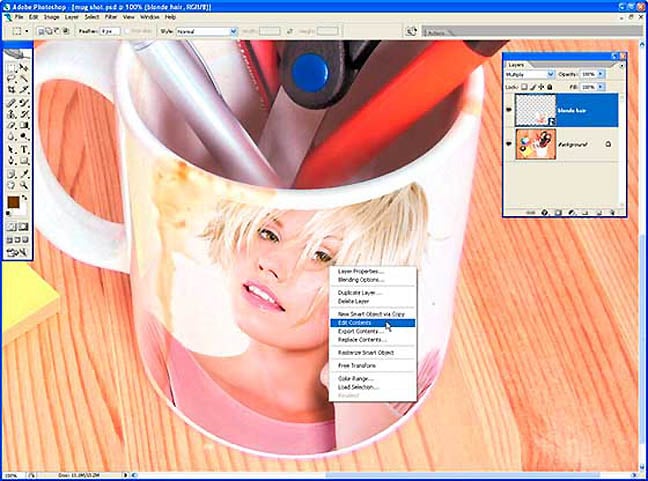 After six releases of Creative Suite, which saw Photoshop acquire everything from 3D editing to timeframe animation, Adobe effectively allowed Photoshop to be unbundled from the suite soon after it relaunched the suite as Creative Cloud in 2013.

Six years earlier, the company had brought out a specialised program called Photoshop Lightroom just for professional photographers, to compete with Apple’s Aperture. A trial bundle of Photoshop and Lightroom proved so popular with buyers that the pair can now be purchased on a relatively cheap (£9/month) Creative Cloud Photograph subscription independently of the full Creative Cloud Complete sub (normally £47/month). 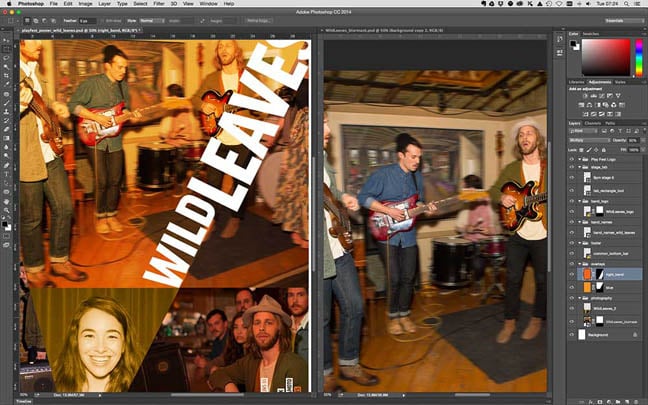 The immediate future development for Photoshop revolves around iOS handheld devices. Being able to paint and retouch images on a tablet always looks good in demos, which tends to make you think it’s all PR nonsense and hype, but Adobe’s focus on gesture responsiveness in combination with its mysterious Ink iPad stylus and Slide ruler mean it can’t be dismissed as a side project – at least, not yet. If anything, Adobe’s work in this area is starting to come together at last across several CC applications, with Photoshop at the forefront.

This doesn’t mean you have to be happy about it. In fact, you might loathe Adobe’s corporate shouldering of competitors and the hint of smugness you perceive as the company gets you to renew your never-ending, drip-drip CC contract when all you wanted to do was buy a software program and keep it because it’s yours and you paid for it. You might even want to have a go at the bloat that has arguably begun to show around the waistline of certain CC apps.

The thing is, Photoshop isn’t one of them. With each new release, even if you’re not interested in seeing more new features, Photoshop gets better at what it already does, in many cases actually getting faster every time. For some people, it’s a wacky toy you read about online in the Daily Fail. But for those who use it, it’s essential and irreplaceable, universal and unlimited, both a product and a verb.

Incidentally, John Knoll continues to work at ILM, having introduced Photoshop into a major feature film for the first time in The Abyss and proceeding to establish it as a standard tool in the movie industry. Tom Knoll continued to work on Photoshop with Adobe up to CS4. He never completed his PhD. As he admitted in 2010: “Working on Photoshop was a lot more fun.” ®