The Extreme Centre, Rise of the Super Furry Animals and The Kind Worth Killing

Page File El Reg bookworm Mark Diston looks at the latest from the literary world. Tariq Ali dons his polemicist hat in support of the disenfranchised electorate. Ric Rawlins charts the success of one of the most celebrated bands to emerge from Wales, and Peter Swanson clocks up his second crime-thriller novel.

The Extreme Centre: A Warning

Tariq Ali is an activist, journalist, historian and novelist. The subject of The Extreme Centre is the political consensus in what used to be called the “first” world; post-Reagan, post-Thatcher, post-USSR.

Ali nails his colours to the mast in fine style; there's no need to intimate there is more than a hint of rouge in them. Take The Extreme Centre’s dedicatee: “In memoriam: Hugo Chavez, the first leader of a movement that defeated the extreme centre”.

He opens with: “Democracy is in serious trouble… A sizeable percentage of the electorate has accustomed itself to not voting, a form of passive protest and a recognition that the system is pretty much corrupt”.

Too much of a pessimistic narcissist to be a man of the left, I am nonetheless always susceptible to a little revolutionary rhetoric. While he's perhaps not Mayakovsky, Tariq is a persuasive polemicist. He exclaims that the politicians “refuse to step down and talk to the people whose worlds they have destroyed.” When you take away the silken tones of his spoken voice, his written work is refreshingly angry. 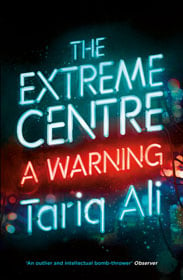 Ali concentrates his arguments on the UK but there is a global geopolitical angle. He argues that since 1990, centre left and centre right parties have become identical and offer no alternatives beyond being agents of the global capitalist elite. He discusses the changes in attitudes since the 2007/8 financial crash and how nascent left wing parties have sprung up in Greece and Spain. Though the recent Syriza successes have happened since the completion of this book.

The Extreme Centre also discusses the Bolivarian movements in South America and offers their model as an example of a solution to Europe’s woes. The independence vote in Scotland is described as a landmark moment in British politics. Indeed, Ali was impressed by the level of public involvement in the debate, so very unlike a General Election.

He believes the next battleground in UK politics is the privatisation of the health service. He describes how it is already happening and gives a depressing list of UK politicians in the pay of private health companies. All in all, “not a pretty picture”.

Included are a few surprise snippets, such as the time the British government “sent Enoch Powell to the West Indies to recruit nurses for the NHS,” and a fabulous quote from Lord Ismay: “NATO was designed to keep the Americans in, the Russians out and the Germans down.”

Tariq Ali has been an awkward lefty for more than half a century and you have to admire him for it, as he is one of the most interesting writers of the left. Always challenging, his critique is precise, his language straightforward and his outrage is palpable.

When he namedrops Euromemorandia 2014 and their fabulous slogan “An End To Sado-Monetarism” it sounds like we could almost be in 1968 again. You have to hand it to Ali; he’s been kicking against the pricks for so long, he knows his subject like the back of his hand and goes straight for the jugular.

Even so, the author sees no sign of immediate revolution, which would seem to require a global disaster – or maybe just another financial crash, which if Greece's current economic situation suddenly deteriorates could become a very immediate threat. He nonetheless remains realistic and optimistic. The Extreme Centre is an incendiary, tragic and inspiring read.