Hook board to the router, control it from other side of the planet

Pics ARM and IBM today hope to lure a few more engineers, tinkerers and the like into their Internet of Things (IoT) world with a cloud-connected development kit bundle.

The new Ethernet IoT Starter Kit combines the gizmo-laden mbed Application Shield with a Cortex-M4-powered board from Freescale. You plug the two together, hook the Ethernet port to an internet-connected router and the USB port to your computer, and (all being well) the kit connects to IBM's BlueMix cloud.

Within the BlueMix cloud, you can use your web browser and Big Blue's Node-RED Node.js-based tool to write scripts to control the hardware from afar, process sensor readings and button pushes, and output stuff to LEDs, Twitter, email, and so on.

The hardware bundle is to go on sale "soon."

From what we at El Reg can gather, there are two reasons why this kit is being touted. One is to get people using IBM's BlueMix and NODE-Red systems, or at least be aware of them. You'd be forgiven for having not heard of them until now. They are supposed to make developing apps for IoT sensor boards a piece of cake; a point-and-click affair with some JavaScript thrown in.

That the kit comes with an Ethernet port is crucial to this: there's no wiring stuff up to breadboards or messy around with radio electronics like low-level engineers do (well, not unless you want to). Plug it in, let it find the internet, and manage the device from the cloud wherever you may be – sitting next to the board or on the other side of the world.

There are plenty, nay, countless embedded sensor gadgets and dev kits out there already, but the focus here is plug'n'play with a management system in your web browser. All you need is the starter kit's MAC address.

The second is to lay the ground work for processor core designer ARM's upcoming mbed OS. Right now, the starter kit uses ARM's existing collection of low-level mbed code and some glue to connect it to BlueMix. But the plan is to eventually run the one-ring-to-rule-them-all OS, due for release this year, on the kit.

One thing to rule all the things

The mbed operating system is aimed at a wide collection of IoT gadgets, and talks over IP to management tools on backend systems running ARM's Device Server software. Those servers talk to web apps and applications running in the cloud; it's all supposed to provide a consistent interface between analytics and control programs and underlying hordes of hardware, which may be miles away at the edge of the network.

mbed OS is in alpha at the moment, expected to hit open beta in August, and be released as a stable product for ARM TechCon in November. The source code will be made available to the public under the open-source Apache 2.0 license, we're told. Some small components of the OS – such as low-level initialization of specific bits of hardware – will remain closed-source blobs supplied by manufacturers of the IoT devices, or stay closed due to other restrictions.

The starter kit is a handy way for ARM to get developers thinking about running device control software in the cloud, far away from the hardware and its low-level firmware. 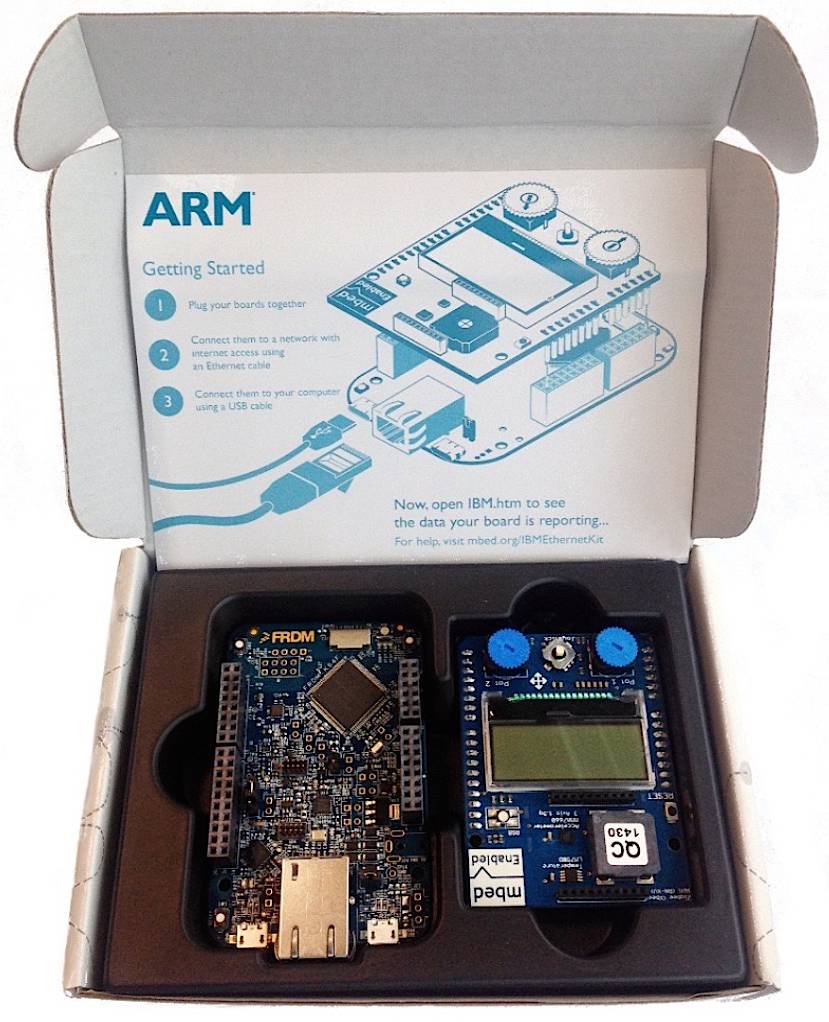 On your marks ... The ARM-IBM starter kit for IoT

The "shield" on top of the starter kit has a load of stuff to interact with: a 128x32 LCD screen, a five-way joystick, two potentiometers you can rotate, a speaker, a three-axis accelerometer, a multicolored LED, a temperature sensor, and a socket for a ZigBee or Wi-Fi module.

The brains of the kit is a pretty modest Freescale development board with a Kinetis K64 microcontroller (120MHz 32-bit ARM Cortex-M4), USB and Ethernet ports, various bits of serial and other IO, 256KB of RAM and 1MB of Flash memory. Good for little tasks, not for running a Raspberry Pi-esque media center. 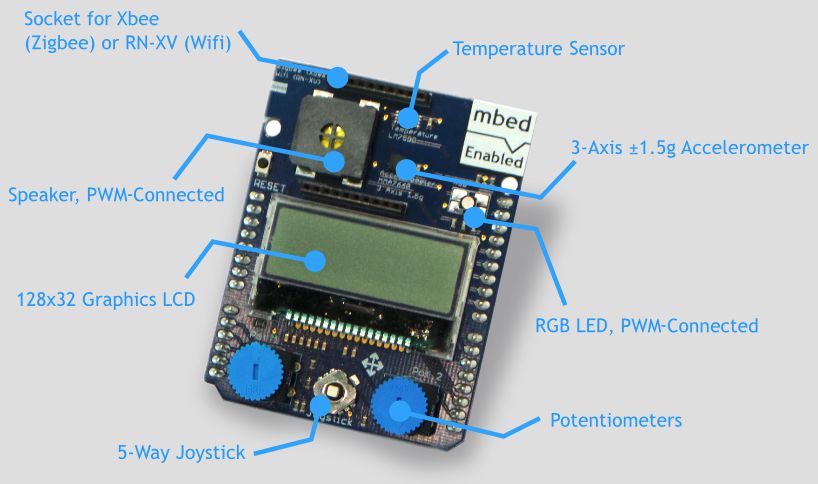 Gizmos on the application shield

"The goal here is to allow an embedded engineer to unbox a device, connect it to the cloud, and get it going in 10 minutes – with no need to enter a credit card or sign up for things," said Zach Shelby, ARM's veep of marketing for IoT.

Although ARM and IBM are launching the starter kit together, mbed OS is not exclusively tied to Big Blue's cloud. This may assuage security and privacy fears; in light of revelations of mass snooping and search warrants by governments, all that data flying out of sensors embedded in walls, streets, wristwatches and so on, will be perfect for cops, spies – and hackers.

Shelby reckons giving people a choice in cloud provider, as mbed OS isn't fixed to a particular vendor, will help them keep information within specific jurisdictions, and out of others.

The newly gobbled open-source PolarSSL library will be included in mbed OS to secure communications between devices and their servers. ARM is also mulling supporting IPv6 address randomization to improve privacy: each gadget can securely and privately identify itself t its server over TLS, but can do so using different addresses over time, making it difficult to correlate transmissions to particular sensors.

"By giving people a choice, by supporting public and private clouds with data centers all over the world, specific regulatory issues are catered for," Shelby said.

"At ARM, we need to work with a wide range of clouds, and we think that’ll solve a lot of issues.

"TLS encryption is a good start, and IPv6 randomization means someone can’t track devices. We're very strict with authentication, controlling what services a device can talk to, and what data that service can access and when." ®